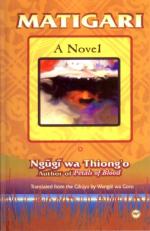 Ngugi wa Thiong'o
This Study Guide consists of approximately 41 pages of chapter summaries, quotes, character analysis, themes, and more - everything you need to sharpen your knowledge of Matigari.

Matigari is a novel by Kenyan author Ngũgĩ wa Thiong'o. The novel told in the first-person and closely follows its eponymous protagonist. The novel is allegorical and is inspited by the turmoil of 1970s Kenya. The story's protagonist is Matigari, who challenges his oppressive government and seeks truth and justice for his people. The novel is divided into three parts, with two parts named after two central characters and another named specifically after Matigari’s pursuit of truth and justice.

In Part One, titled “Ngaruro wa Kiriro - Wiping Your Tears Away,” Matigari relinquishes his weapons upon defeating his longtime opponent, Settler Williams (an allegorical representation of settler colonialism.) Believing that the country will soon be restored, Matigari buries his AK-47 gun under a tree and acquires a strip of tree bark which he calls the “belt of peace” (4). He befriends a small boy named Mũriũki and a worker named Ngaruro wa Kiriro. Ngaruro is partly responsible for organizing a strike in the factory.

At a restaurant, they meet a woman named Gũthera, who tells the story of a young virgin forced to choose between her desire to respect her heavenly father (God) and her wish to protect her literal father. Gũthera tells Matigari to search for his wife and family in the plantation fields. There, they find Matigari’s house, which now belongs to Settler Williams’ son, Robert, and his assistant, John Boy Junior. When Matigari requests his house back, Robert and John Boy refuse, claiming that he must first provide proof of ownership in the form of the title deed. Part One ends with Matigari being thrown into jail, then breaking out. His name becomes famous across the country, and he himself is turned into a legend.

In Part Two, “Macaria ma na Kihooto - Seeking of Truth and Justice,” Matigari goes on a hunt for truth and justice, asking random groups of people for their advice. These groups, not recognizing Matigari, tell Matigari to go look for himself. A teacher, student, and priest all recommend that Matigari not challenge the government’s power. The part ends with Matigari and Ngaruro thrown into a mental hospital.

In Part Three, “Guthera na Muriuki - The Pure and the Resurrected,” Matigari and Ngaruro break out of the mental hospital. Meanwhile, the Voice of Truth announces over the radio that the British and European Community have given the country a sizable loan for more security measures. A subsequent announcement reveals that Ngarũro wa Kirĩro has been shot and killed by police. However, Matigari refuses to back down from his fight, insisting that the world has been turned upside down and must be made right again. Matigari has come to a new realization: after having followed a path of non-violence and peace, he plans to reclaim his house through force and violence. Guthera and Mũriũki insist on helping Matigari.

Matigari, Guthera, and Muriuki make a place to retrieve the Mercedes and the gun from the mugumo tree before going to the house to fight Robert and John Boy. The whole country waits in suspense, wondering who Matigari really is. He goes over to get more petrol. There, the station master tells Matigari about the public’s most recent rumors about him. The informer from earlier, Giceru, is also there. He witnesses Matigari and quickly moves for the telephone.

As Matigari drives towards the mugumo tree, police cars begin to follow him. Matigari decides to take them in the direction of the house. Matigari leaps out of the car and sets the house on fire. The people, inspired by his actions, decide to set fire to all the other oppressors’ belongings and houses. Soon after, Matigari and his friends realize that they are being trailed. They dash out of the car and run from the bullets being shot at them. Guthera is shot in the right leg. Matigari scoops up Guthera, carrying her to the river in front of them. Together, they fall into the river, the dogs staying at the river bedside. Eventually, the army catches up and they stay watching the river, hoping to see Matigari and Guthera’s bodies floating. Rain begins to fall, putting out all the fires that earlier had consumed the oppressors’ houses.

The novel ends with Muriuki digging up all the things that Matigari had hidden under the mugumo tree. He slings the AK-47 across his shoulder and watches as a riderless horse gallops past him. Muriuki watches the rain fall and in the distance, hears the sound of a siren. Suddenly he hears the voices of the workers, peasants, students, and other “patriots of all the different nationalities of the land” (148) blending together in the cry, “Victory shall be ours!” (148).

More summaries and resources for teaching or studying Matigari.