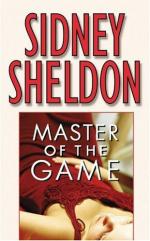 Sidney Sheldon
This Study Guide consists of approximately 48 pages of chapter summaries, quotes, character analysis, themes, and more - everything you need to sharpen your knowledge of Master of the Game.

Master of the Game Summary & Study Guide includes comprehensive information and analysis to help you understand the book. This study guide contains the following sections:

This detailed literature summary also contains Topics for Discussion and a Free Quiz on Master of the Game by Sidney Sheldon.

Master of the Game by Sidney Sheldon is an epic novel that tells the story of five generations of the McGregor family. The novel begins with Jamie, the patriarch, and ends with Robert, his great-great grandson. Jamie begins a company, Kruger-Brent, Limited, with the spoils of a theft and dreams of revenge. Jamie's daughter grows up to take over the reins, making Kruger-Brent an international conglomerate. Kate wants her own son to take over from her, but Tony has other dreams. When Tony becomes ill, Kate turns her attention to her granddaughters, only to be disappointed again. On the eve of her ninetieth birthday, Kate pins all her hopes on nine-year-old Robert, determined that Kruger-Brent remains in McGregor hands. Master of the Game is an adventure of epic proportions, exposing both the good and bad of human ambition.

Jamie McGregor leaves the safety of home to find diamonds in the deserts of South Africa. Jamie is successful in his endeavors, but is cheated by a con artist who prays on inexperienced prospectors. Jamie joins forces with Banda, a native man, to exact revenge on their common enemy. Jamie and Banda steal diamonds in a dangerous heist that should have left them both dead. Jamie takes the spoils of this adventure and puts into action a scheme to ruin his enemy, Salomon van der Merwe. Van der Merwe is a Christian man with an innocent daughter. Jamie seduces and impregnates this daughter, ruining Van der Merwe's reputation. Depressed from his bad fortune, Van der Merwe begins making mistakes in his business dealings, finding himself increasingly dependent on the local bank and the loans they offer him. Van der Merwe has no way of knowing Jamie owns the bank. When Van der Merwe has put up his final possession in collateral for the loans, Jamie calls them in, taking everything Van der Merwe ever had.

Van der Merwe's daughter, Margaret, gives birth in the weeks following her father's suicide. Margaret, aware of what Jamie has done, but still in love with him, schemes to win his affections. Margaret leaves her infant son with his father for a week, forcing Jamie to interact with the tiny boy. Jamie falls in love with his son and eventually consents to make Margaret his wife. However, Jamie treats the marriage as one of convenience and never acknowledges Margaret inside their home, except for one drunken night of passion in which Jamie mistakes Margaret for his mistress. Margaret gives birth to a daughter nine months later.

Jamie's business has become successful, expanding from diamonds to land to just about anything that will make money. Jamie still owns Van der Merwe's diamond beach. When an overseer on the beach becomes cruel toward the native workers, a riot begins. While Jamie attempts to settle the situation on sight, someone breaks into his home and steals his son. A few nights later, his daughter is taken. Banda tells Jamie that his son is dead, left alone to wander in the desert, but that his daughter has been returned. Jamie is so heartbroken over the death of his son that he suffers a stroke. For a year, Margaret finally has her husband's full attention.

Margaret takes over Jamie's company and runs it with his manager, David Blackwell. Together they attempt to make a young woman out of Kate, but when she resists their efforts, Margaret sends her to a boarding school. During Kate's final year at school, Margaret develops cancer and dies. Kate goes on to business school and then begins to run the company with David. Kate is in love with David, and upon learning that he intends to marry someone else, Kate schemes behind his back to end the engagement and marry him herself. Kate and David have a happy marriage for several years, but David dies days before the birth of their only child, Tony.

Kate adores her son, giving him everything a child could desire. Kate hopes that Tony will take over the reins of Kruger-Brent, Limited one day, but Tony wants to be an artist. Kate relents and allows Tony to study in Paris with the understanding that if he fails, he will come back to run Kruger-Brent. When Tony feels confident enough to have a showing of his work, Kate arranges for an art critic to attend. The critic writes a scathing review, calling Tony's work amateurish. Tony returns to New York to work with his mother, but refuses to allow her to influence his life any further. When Kate attempts to pair Tony with the daughter of a Texas businessman, Tony chooses to marry the less exciting daughter of a German businessman, unaware that this lovely woman had been Kate's choice for Tony all along.

Tony's wife learns that a pregnancy can kill her and shares the news with Kate. Kate encourages the girl to get pregnant anyway. The same night Tony's wife dies giving birth to twins, he learns not only did his mother know about the possibility of death for his wife, but that she hired the art critic to pan his work and his girlfriend during that time to date him. Tony has a psychotic break and tries to kill his mother. While receiving treatment, Tony is given a lobotomy that leaves him unable to be a participating member of society any longer.

Kate raises Tony's twin daughters with the hopes that one of them will someday take over the reins of Kruger-Brent. Eve seems to be the ideal candidate, but Kate is unaware that Eve is a cruel girl, often plotting to kill her sister. As Eve matures, she begins to behave in promiscuous ways that threaten to damage the reputation of the Blackwell family. Kate disowns Eve, leaving Alexandra as her only possible heir. Eve is angered by this change in circumstances and begins to plot against her family. Eve joins forces with George Mellis, a sadistic man, to murder Alexandra. George convinces Alexandra he is a charming, suave man, and convinces her to marry him. Eve wants George to kill Alexandra after their marriage is secure and Kate has changed her will leaving everything to both Alexandra and George. However, before George can go forth with the murder, Kate forgives Eve. George is determined to go ahead with the plan anyway, hoping to inherit everything and then kill Eve. However, Eve turns the tables and kills George instead.

After George is gone, Eve finds herself trapped in marriage to a milquetoast plastic surgeon who learns about her role in the murder. After a time, the plastic surgeon disfigures Eve, leaving her permanently dependent on him. At the same time, Alexandra finds love with George's therapist. Alexandra and her new husband have a son who Kate hopes will be the future of Kruger-Brent, Limited, at long last.

More summaries and resources for teaching or studying Master of the Game.

Master of the Game from BookRags. (c)2022 BookRags, Inc. All rights reserved.