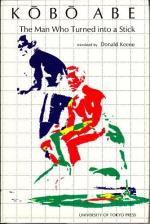 Kobo Abe
This Study Guide consists of approximately 47 pages of chapter summaries, quotes, character analysis, themes, and more - everything you need to sharpen your knowledge of The Man Who Turned Into a Stick.

A collection of modern Japanese plays that looks into the spiritual, political, and moral questions that faced most Japanese during the postwar era.

This is one of a very few books written in English that is totally focused on Abe's work. Iles offers a comprehensive study, interpretation, and criticism of both Abe's fiction and his plays.

This book, written by the noted scholar and translator of Abe's works, offers an extensive study of Japanese literature, including drama. Keene has translated the works of many major contemporary Japanese writers.

More summaries and resources for teaching or studying The Man Who Turned Into a Stick.

The Man Who Turned Into a Stick from Gale. ©2005-2006 Thomson Gale, a part of the Thomson Corporation. All rights reserved.