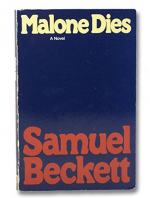 Samuel Beckett
This Study Guide consists of approximately 34 pages of chapter summaries, quotes, character analysis, themes, and more - everything you need to sharpen your knowledge of Malone Dies.

The following version of this book was used to create this study guide: Beckett, Samuel. Three Novels: Molloy, Malone Dies, and The Unnameable. Translated by Samuel Beckett and Patrick Bowles. Grove Press, 2009.

Following the publication of Molloy in 1947, Malone Dies was first published in in 1951, in French, and the English translation followed in 1956, as a collaboration between Beckett himself and Patrick Bowles. The book takes the form of the inner monologue of an old, bed-ridden man who cannot do anything save for muse on existence and tell a story in an exercise-book to pass the time.

Malone begins to tell the story of a young boy named Sapo, whose parents, poor and sickly as they are, pressure him to pursue an honorable profession such as law or medicine. To this end, they make him attend private lessons during the summertime, but Malone’s narration shows Sapo to be spending his summer at the farm of a family called the Lamberts. The father, Big Lambert, is a farmer and a butcher who abuses his wife, who is depressed and seemingly indifferent to her situation; Big Lambert and his son also have incestual feelings toward the daughter of the family. Sapo does not engage much with the family, but seems to just linger in the background of their lives.

After Malone loses his pencil and recovers it after two days, he returns to Sapo’s story, but renames him Macmann, signaling that the boy has grown into an adult. Macmann is a wanderer that spends most of his time watching passersby. One day he is caught in a rainstorm, and decides to lie down on the ground, so that he can keep the front side of his body dry. Eventually, Macmann turns over to his side and begins to roll, dreaming that could be a cylinder in a flat land, so that he never has to stand up again (239). Malone interrupts the narrative, to talk about the various possessions he has in his “inventory,” including his reserve pencil, a brimless hat, and a broken pipe. He notes that he lost his stick, which was important for his ability to retrieve things around him.

Returning to Macmann, Malone notes that he is now in in an asylum called House of Saint John of God, and is being looked after by a nurse named Moll. Macmann and Moll eventually pursue a sexual relationship, but, presumably due to illness, she suddenly dies, and a man named Lemuel comes to replace her, who Malone describes as “malevolent" (259). Meanwhile, an unknown man comes to visit Malone, deals a blow to his head; Malone writes down questions for him in an attempt to glean some information regarding his circumstances, but he gets no answers.

Lemuel gets notice from the head of the institution, Lady Pedal, to take six of the inmates of the asylum out on an excursion to see Druid remains on a nearby island. A group of inmates including Macmann, Lemuel, Lady Pedal, and two boys dressed in sailor suits set off on a ferry to the island. Suddenly, Lemuel murders the two boys, and Lady Pedal faints out of shock. He ushers the inmates back into the boat, and as he raises the hatchet to kill them, the novel breaks off into sentence fragments, suggesting that perhaps Malone has died.

More summaries and resources for teaching or studying Malone Dies.