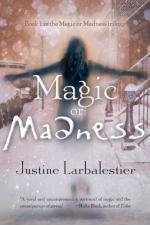 Plot Summary
+Chapters Summary and Analysis
'Reason Cansino', 'With the Witch', 'In the Witch's House'
'In the Witch's Bedroom', 'Into the Cellar', 'Through the Window'
'Treetop', 'In the Witch's Kitchen', 'Cemetery'
'In the Asylum', 'Going Underground', 'Through the Witch's Door'
'Rescue', 'In Bazarroland', 'Top of the World'
'Feathers', 'Searching', 'Nightmare'
'into Magic', 'with Bubbles', 'Knowledge'
'Maelstrom', 'Closer', 'At Inferno'
'Friends', 'Snot', 'Out the Door', 'Eau de Reason'
'Away from the Witch', 'Worse Things', 'In the Air', 'Back Home'
Characters
Objects/Places
Themes
Style
Quotes
Topics for Discussion
Order our Magic or Madness Study Guide

Justine Larbalestier
This Study Guide consists of approximately 59 pages of chapter summaries, quotes, character analysis, themes, and more - everything you need to sharpen your knowledge of Magic or Madness.

This detailed literature summary also contains Topics for Discussion on Magic or Madness by Justine Larbalestier.

When Reason's mother Sarafina goes mad and tries to kill herself, Reason is sent to stay with her grandmother Esmeralda. Sarafina has told Reason stories about how Esmeralda thinks she is a witch and so carries out horrible rituals such as animal sacrifice. When Reason digs up Sarafina's dead cat in the cellar, she realizes this must be true. She runs away, but when she walks through the back door she is suddenly in New York. Reason now knows magic is real. A girl called Jay-Tee befriends her, but Reason's grandfather Jason Blake is trying to steal their magic. Reason and Jay-Tee run away, but they are soon found by Esmeralda, who saves them from Jason Blake. Jay-Tee and Reason decide to give Esmeralda a chance, and she begins to teach them about magic. Reason is still unsure who she can trust, however.

Reason and her mother Sarafina are constantly on the move in the Australian outback, running from Sarafina's mother Esmeralda, who has claimed custody of Reason. However, when Sarafina tries to kill herself she is sent to a special hospital in Sydney, and Reason is sent to live with Esmeralda.

Reason is afraid and suspicious of Esmeralda because Sarafina has told her that Esmeralda carries out horrible rituals such as animal sacrifice. Reason searches the house for signs of this, and finds dried flowers, a feather, a strange key, and human teeth in Esmeralda's room. She searches the cellar, but it is just a normal wine cellar.

Reason meets Tom, the boy who lives next door, who is friends with Esmeralda. He immediately warms to her, and she finds herself trusting him too. He offers to show her around the town, and takes her to the cemetery where her family's grave monument is. Reason is surprised to see that so many women in her family die very young. Tom knows this has something to do with magic, but he has promised Esmeralda not to tell Reason about it.

Reason goes to visit her mother in the hospital. Sarafina tells her to look in a certain place in the cellar. Reason does, and she finds Sarafina's old pet cat, dead with its throat slashed. She knows Sarafina must be telling the truth about Esmeralda, and immediately decides to run away. Before leaving, however, she tries the key in the mysteriously locked back door. It unlocks, and Reason steps through. She is in New York.

A girl called Jay-Tee has been watching out for Reason under the orders of a mysterious 'he.' Jay-Tee gives Reason a warm coat and boots, then takes her back to her apartment. She makes friends with Reason, gaining her trust so that she can hand her over to Jason Blake, the man who currently controls her. Blake takes them both out for dinner and tells Reason he will answer her questions in return for some of her magic. She agrees, but only allows him to drain her magic for about ten seconds before she stops him.

Jay-Tee takes Reason out dancing so that she can absorb the energy of the club and recharge her magic. At the club Jay-Tee's brother Danny comes up to Reason and asks her to tell Jay-Tee that it is safe for her to come home again. He knows she ran away because of their father. Reason likes Danny and thinks she can trust him, but Jay-Tee is freaked out by his presence and quickly leaves. They go out for breakfast, and Jay-Tee apologizes for having manipulated Reason. Reason forgives her and tells her that they have to get away from Jason. She persuades Jay-Tee to call Danny, who tells her that her father is dead. They arrange to meet Danny later in the day.

Unfortunately, Jason turns up unexpectedly. Reason tells him they want nothing more to do with him, but he will not let them leave. Reason gets angry and almost kills him with her magic, but Jay-Tee stops her in time. They run to the cafe where Danny is meeting them, and there Reason sees Tom, who has been helping Esmeralda to search for her. Esmeralda arrives and Jay-Tee and Reason run away again.

Jay-Tee heads for the door to Australia, but Jason is waiting for them. Esmeralda pulls up in a taxi and becomes locked into a staring match with Jason. Some kind of magical duel is taking place. Tom persuades Reason and Jay-Tee to at least give Esmeralda a chance. Reason and the others lend Esmeralda their magic, and she then easily defeats Jason. They all quickly walk through the door back into Sydney.

Esmeralda explains that magic is in all things, but is stronger in magic users like them. Magic is energy, so every time they create or use it they are shortening their lives. However, if they do not use it, they will go insane like Sarafina. This is the magic user's choice: magic or madness. Esmeralda promises to teach them, and to try not to steal their powers, but she cannot promise that she will not turn on them one day. Jay-Tee and Tom trust her for now, but Reason remains suspicious.

More summaries and resources for teaching or studying Magic or Madness.