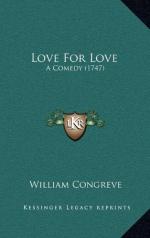 William Congreve
This Study Guide consists of approximately 74 pages of chapter summaries, quotes, character analysis, themes, and more - everything you need to sharpen your knowledge of Love for Love.

Research the "Glorious Revolution" of 1688. Who was the king who was deposed? Why were people unhappy with him? Who replaced him? What lasting changes came about as a result of the revolution?

As a group, direct part of one of the acts of Love for Love. How do you make sure the audience understands the jokes? How do you handle the actors' fast-paced entrances and exits? How do you interpret the characters of Angelica and Valentine?

Research the lives of upper-class women in English society during the late 1600s. What avenues were open to them in terms of education, careers, marriage, and owning their own property? When...

More summaries and resources for teaching or studying Love for Love.

Love for Love from Gale. ©2005-2006 Thomson Gale, a part of the Thomson Corporation. All rights reserved.