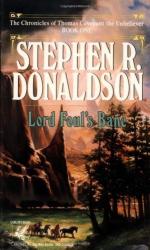 Stephen R. Donaldson
This Study Guide consists of approximately 38 pages of chapter summaries, quotes, character analysis, themes, and more - everything you need to sharpen your knowledge of Lord Foul's Bane.

The story starts out with Thomas Covenant walking down the street. People are moving out of his path as he heads to the light and phone company. Thomas Covenant has leprosy and the entire town is scared of catching it. The story is about his unbelief that he can make a difference in the world to which he is taken. He is supposed to help stop the evil Lord Foul and Drool Rockworm.

Thomas has a wedding ring that the people of the land believe to be white gold that holds wild powers that will destroy peace. He is missing part of his fingers because of his leprosy and they believe that he is the reincarnated Berek Halfhand who had his fingers cut off during battle. He has been told to deliver a message to the Lords by Lord Foul concerning Drool Rockworm and the destruction of the Land.

Along the way they encounter many ur-viles, cavewigths and other creatures they must fight. They even head back to Woodhelven to find that it has been destroyed and almost everyone killed. Thomas is beginning to struggle with what decision he will make when it is time to decide what to do. When they get to the mountain they face unfathomable odds but know that they must continue. They manage to get the staff from Drool Rockworm and lose several of their warriors and Lords along the way. When the Fire Lions kill Drool Rockworm, Thomas is instantly transported back to his own time and place.

He decides the whole thing was a dream but can't help thinking about the quest and all the people he left behind. He is still a leper, but the anger that was in him at the beginning is now gone. He spent so much time learning to live with his disease and felt like the whole world cut him off and tried to act as if he were dead. He found an entire land that wanted to act as if he were the only thing that gave them hope. In the end he is thankful that those on the quest survived and that he was able to go home.