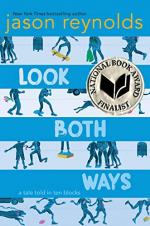 Related Topics
Patina
The Boy in the Black Suit
As Brave as You
Stamped: Racism, Antiracism, and You
For Every One (poem)
Ain't Burned All the Bright
Stuntboy, in the Meantime

Jason Reynolds
This Study Guide consists of approximately 56 pages of chapter summaries, quotes, character analysis, themes, and more - everything you need to sharpen your knowledge of Look Both Ways.

This detailed literature summary also contains Quotes and a Free Quiz on Look Both Ways by Jason Reynolds.

Look Both Ways by Jason Reynolds consists of ten chapters, each focused on a student or group of students who attend Latimer Middle School. The students are learning about themselves, each other, and their world.

Jasmine and Terrence Jumper, known as TJ, are best friends, though some people believe that a boy and girl cannot possibly be best friends. Jasmine has recently missed a lot of school because of her sickle cell anemia. As they prepare to walk home, Jasmine rebukes TJ about the boogers she can clearly see in his nose. He uses his shirt to clean his nose. He has recently learned that boogers are basically made up of dust and water. He has also learned that the human body is mainly made up of water, and he knows that God made humans from dust. He has put these facts together and believes that humans are basically boogers. Jasmine depends on TJ to take the edge off the more difficult things of her life.

John John, Francy, Trista, and Britton (called Bit by his friends), make up a group called the Low Cuts. They became friends after joining a support group for students whose parents have cancer. The four are known for taking any change they can lay their hands on, though they never steal anything else. On this particular day, the four pool their money to buy candy that they sell to old men in a pool hall. They use that money to buy four scoops of ice cream from the ice cream truck, and they take it to Bit's mother, who has recently been diagnosed with cancer again.

Stevie attends a private school nearby. He is outside Latimer Middle School this afternoon because he needs to apologize to Pia, a girl who skateboards everywhere she goes. The previous day, Stevie had been with a group of bullies who broke Pia's skateboard. Stevie, who has been bullied himself, did not actively participate. However, since he was there, his mother is making him apologize. Pia, however, leaves by the back door because she wants to go to the cemetery to visit the grave of her sister, Santi, who was killed after someone shoved her into traffic.

Fatima walks home alone every afternoon and she makes a lengthy list of everything that is the same and everything that has changed. She meets up with Benni each day, a woman who apparently has some sort of mental illness. On this particular day, Fatima asks Benni if she can play one of Benni's imaginary instruments.

Bryson stands up for his friend Ty when everyone begins accusing him of kissing another boy, Salem. In fact, Salem kissed Ty on the cheek but Salem joined in with the teasing. Bryson kissed Ty on the cheek to prove that it was not a big deal and that everyone should stop being so terrible, but the boys simply turned their teasing on Bryson. They followed him home and he wound up in a fight that caused him to miss a day of school. At the end of the day, Ty shows up with some roses he picked from a neighbor's house. Bryson invites him inside, proof that their friendship is intact.

Simeon and Kenzi live in the same apartment building. Simeon is big for his age and Kenzi is small, and Simeon clearly feels protective toward Kenzi. Kenzi is often hit accidentally in the crowded hallway because he is so small. At the end of the day, Kenzi rides Simeon's back down the hall to avoid the danger. The boys have a secret handshake, pledge their brotherhood, and are clearly best friends. Kenzi's brother is in jail because of a car that Simeon's brother stole, which may be one reason Simeon feels the need to protect Kenzi.

Satchmo is terrified of dogs because he was bitten severely when he was younger. Now, a man in his neighborhood has a new dog, and Stachmo has created an elaborate escape plan that he will put into effect if the dog chases him. However, when he walks home that evening, the neighbor invites him to meet the new dog, which is clearly affectionate.

Cynthia is a budding comedian who has a strong relationship with her mother and her grandfather. She plans a comedy show each day after school on the off-chance her mother will come by to spend a few minutes with Cynthia. Her mother seldom shows up because she has work and then school, so Cynthia then goes upstairs where she spends the evening with her grandfather.

Gregory has terrible body odor. His friends, Candace, Remy, and Joey, help him prepare to tell Sandra that he likes her. They spray him down with body cologne and Candace rubs lotion onto his hands and arms. The “help” goes wrong when Joey provides Vicks for Gregory's chapped lips, which burns so badly it makes his eyes water. When he talks to Sandra, she asks why he keeps fanning his lips and Gregory is unable to fully explain. Sandra then begins to smile. Gregory fears she is going to laugh at him, but believes she may not.

Canton Post is the son of the school crossing guard. His mother was struck one time by a school bus. Canton was terrified when she returned to her job until Mr. Munch, the janitor, altered a broom that he said Canton should pretend was a dog. He believed the “dog” could help Canton deal with his anxiety and Canton discovered that it worked. Now, a year after the accident, the “dog” is looking bad and Ms. Post says it looks more like a school bus than a dog.

More summaries and resources for teaching or studying Look Both Ways.