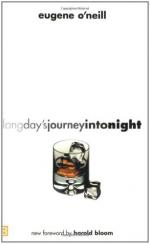 Although Eugene O'Neill had completed Long Day's Journey into Night by 1941, it was not produced until 1956, three years after his death. He had originally stipulated that it was not to be produced or published until twenty-five years after he died. However, before his death he gave verbal permission to the Royal Dramatic Theatre to stage it in Stockholm, Sweden, a country that had accorded him a special loyalty throughout his career.

The Stockholm production, which opened on February 10,1956, was very successful and prompted wide interest in the play. Nine months later, on November 7, the play opened to mixed but mostly favorable reviews at the Helen Hayes Theatre in New York. Featured in the cast were Frederic March as James Tyrone, Florence Eldridge as Mary, Jason Robards, Jr. as Jamie, Bradford Dilman as Edmund, and Katherine Ross as Cathleen. Jose Quintero both produced and directed the play.

Carlotta O'Neill, the playwright's widow, saw to the play's publication in the same year. In 1955 she had copyrighted the work as an unpublished play, and in the following year she asked Random House publish it. The editors declined, even though they held a sealed copy of the script that O'Neill had originally deposited with them. Mrs. O'Neill then offered the publication rights to the Yale Library, which arranged its release through the Yale University Press with the provision that the play royalties would be used to endow the Eugene O'Neill Memorial Fund at the Yale School of Drama. The published work met with great critical acclaim and won for O'Neill a fourth Pulitzer Prize.