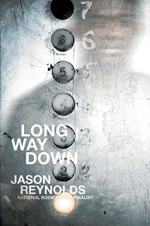 Related Topics
Ghost
All American Boys
For Every One
Stamped: Racism, Antiracism, and You
For Every One (poem)
Ain't Burned All the Bright
Stuntboy, in the Meantime

This detailed literature summary also contains Quotes and a Free Quiz on Long Way Down by Jason Reynolds.

The following version of this book was used to create this study guide: Reynolds, Jason. Long Way Down. Atheneum, 2017.

Fifteen-year-old Will Holloman decided to tell the story of what happened to him immediately following his older brother Shawn’s death. Someone shot Shawn while he was on the way back from the store to buy a special cream for his mother’s eczema. Afterward, Will felt intense grief, but was determined to follow The Rules: no snitching, no crying, and get revenge on whoever killed your loved one.

Back in the Holloman’s apartment, Will found the gun that Shawn hid in a drawer on his side of their shared bedroom. Will planned to shoot Carlson Riggs, a member of the Dark Suns gang, who he believed killed Shawn. Will entered the elevator and pressed the “L” button to take him down to the ground floor.

The elevator descended and Buck entered on seventh floor. This shocked Will because he believed Buck, who had been a close friend of Shawn’s, was dead. Buck checked the bullets in the gun Will held, which Buck had initially given to Shawn. Then, he started smoking a cigarette.

The elevator stopped on the sixth floor. Dani entered. Dani had been Will’s friend when they were children, but she had been killed during a shooting when she and Will were eight years old. Dani reminded Will of his childhood. She made him feel bad that he planned to shoot someone.

The elevator stopped on the fifth floor next. Will’s Uncle Mark entered. Will recalled the two stories that his mother had told him about his uncle. The first was about the movie Uncle Mark wanted to film with Will’s parents. The second was about how Uncle Mark began dealing drugs to make enough money to buy a new camera, but ended up continuing on as a drug dealer and getting himself killed. On the elevator, Uncle Mark tried to get Will to narrate his revenge plan like a movie, but Will struggled when he got to the part about vocalizing his intent to shoot Riggs.

The elevator stopped on the fourth floor. Will’s father, Mikey Holloman, entered. Will hugged his father, whom he had not seen since Mikey died when Will was three years old. Mikey told Will the story of how he had meant to follow The Rules and seek revenge against Uncle Mark’s killer. However, Mikey ended up killing the wrong person. Then, the loved one of his victim had killed him.

The elevator stopped on the third floor next. Frick entered. Frick was the man who had killed Buck. Frick had meant to rob Buck so that he could join the Dark Suns, but he got nervous and ended up shooting Buck. Then, Shawn killed Frick as revenge.

The elevator stopped on the second floor. Shawn entered. He would not speak to Will as Will tried to explain how he was following The Rules. When the elevator finally reached the ground floor, all of these un-dead people exited the elevator, but Will remained inside. Shawn turned around and asked Will if he was coming.