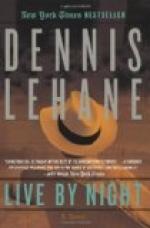 Dennis Lehane
This Study Guide consists of approximately 43 pages of chapter summaries, quotes, character analysis, themes, and more - everything you need to sharpen your knowledge of Live by Night: A Novel.

Live by Night: A Novel Summary & Study Guide includes comprehensive information and analysis to help you understand the book. This study guide contains the following sections:

This detailed literature summary also contains Topics for Discussion on Live by Night: A Novel by Dennis Lehane.

Live by Night, published in 2012, is the tenth novel by Dennis Lehane, several of whose books have been made into popular films. Set in Massachusetts, Florida, and Cuba, the novel traces the criminal career of Joe Coughlin, from his youth as a vandal and petty thief through his rise to power in the mafia. The story opens in 1926 in South Boston, where Joe and two cronies hold up a poker game, only to discover that the players belong to the gang of a powerful boss named Albert White. Joe is captivated by Emma Gould, a lovely young woman who is serving drinks at the game. She turns out to be Albert's moll, but Joe commences a dangerous affair with her. After Joe robs a bank with his buddies, Dion and Paolo Bartolo, Joe tries to escape from Boston with Emma, but she double-crosses him. He falls into the hands of Albert, but is saved by his father, Thomas Coughlin, a prominent policeman. Emma disappears, apparently killed by Albert. Joe goes to prison, where he meets mob boss Maso Pescatore, whose gang is at war with Albert's gang. Maso is released from prison and arranges Joe's release, sending him to Florida to build up a rum-running business during Prohibition. Joe's first task is to run Albert out of Tampa, where he now is operating. He does this, and starts building a criminal empire, even as he continues to mourn the loss of Emma.

In Ybor City near Tampa, Joe enters a partnership with Esteban Suarez, a Cuban nightclub owner and supplier of illegal raw materials from Cuba for making rum. Through Esteban, Joe meets Graciela Corrales, a beautiful Cuban who is bent on aiding a revolutionary effort in her home country. Graciela is married to a man in a Cuban prison, who she thinks is a revolutionary but actually is a con man and is not even in jail, as Esteban tells Joe. To cement the new partnership with Esteban, Joe engineers the theft from a Naval ship of munitions that are then sent to the Cuban revolutionaries. Romance develops between Joe and Graciela. They set up shop, and Joe's business booms.

The daughter of Tampa police chief Irving Figgis goes to Hollywood to pursue acting but gets involved with hard drugs and pornography. When Figgis brings her back, she becomes religious and preaches against alcohol and gambling, which turns public opinion against a casino Joe wants to open. The daughter, Loretta Figgis, later commits suicide.

Maso perceives Joe as weak and tries to replace him with Maso's son, Digger, who will be assisted by Albert White. Albert almost kills Joe, but his men rescue him and Albert dies in the gunfight. Joe then kills Maso and has Digger killed. Joe then turns over his empire to his top man and boyhood friend, Dion Bartolo. Joe and Graciela go to Cuba, where they buy a tobacco plantation. Joe meets Emma Gould, who escaped Albert's grasp and is running a brothel in Havana, and he sees that she has become hard and selfish. When Graciela and Joe visit Tampa, where Graciela is to receive an award for charity work, she is shot dead in the street by Irving Figgis, deranged by his daughter's death. Irving then commits suicide. A bereaved Joe ages rapidly, and moves back to Florida with Tomas, his young son by Graciela.

More summaries and resources for teaching or studying Live by Night: A Novel.

Live by Night: A Novel from Gale. ©2005-2006 Thomson Gale, a part of the Thomson Corporation. All rights reserved.