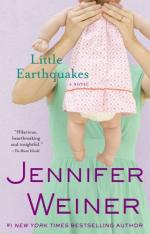 Related Topics
Mrs. Everything
Big Summer
That Summer: A Novel
The Summer Place

Jennifer Weiner
This Study Guide consists of approximately 97 pages of chapter summaries, quotes, character analysis, themes, and more - everything you need to sharpen your knowledge of Little Earthquakes.

This detailed literature summary also contains Topics for Discussion and a Free Quiz on Little Earthquakes by Jennifer Weiner.

Little Earthquakes by Jennifer Weiner was published in 2005 and takes place in the present, where it follows the lives of four young women through their first pregnancies, childbirth and beyond. Three of the women, Becky, Kelly and Ayinde, meet at a pre-natal yoga class; they meet the fourth woman, Lia, in a coffee shop, where Becky recognizes her as the woman who has been watching her. The four women share the spotlight as main characters, although Lia's narration is in the first person while the rest of the women's stories are in the third person.

The novel opens as Lia sits in the park in Philadelphia, watching a pregnant woman (Becky) and reflecting on her recent past in California as an up-and-coming actress. She has recently lost a baby to SIDS and after not being able to come to terms with it, she suddenly leaves her husband, a successful actor, with an "I'm so sorry" note and goes back to Philadelphia to her mother's home. Since she told her husband, Sam, her parents were dead, he has no idea how to find her. She comes home only because she feels she has to get away and has nowhere else to go. She and her mother never got along and she thinks her mother hates her. Lia is suffering from depression and can't seem to get over the SIDS death of her ten-week-old baby. After they become friends, she begins to work in Mas, Becky's restaurant.

Becky, who is overweight, co-manages a restaurant, is married to a doctor and has the mother-in-law from hell. She finds herself in a yoga class with Kelly, whom she thinks looks like a Barbie clone and Ayinde, a model type and former newscaster. After these three become friends, they are together in a coffee shop when Becky recognizes Lia as the woman who's been watching her and they eventually befriend her. Becky is a warm-hearted woman who manages to find the humorous side of almost any situation. She is mad about her husband, who loves her, but he is such a mama's boy he can't say no to his mother Mimi, even when it hurts Becky. Mimi is a childish, selfish woman who makes Becky's life miserable, especially after her daughter, Ava, is born.

Ayinde has quit her job as a newscaster in Texas and married Richard Towne, a star basketball player who was recently traded to the Philadelphia Seventy-Sixers. When she goes into labor a little early, she can't reach her husband, who is away at the first round of the play-offs. When he finally arrives, just before the birth, she thinks she catches a faint whiff of perfume on him. Even though she is beautiful and married to a wealthy and successful athlete who seems to adore her and their new baby boy, she finds motherhood far harder than she'd imagined. She can't seem to find the time to get dressed until late afternoon and eventually obsesses so much over the baby, her husband feels pushed away. He has an affair and their lives are torn apart.

Kelly is an event planner married to an up and coming computer guy. They live in a beautiful but almost empty apartment high-rise that she plans to fill some day with only the very best of everything. No one who meets her would ever guess she is one of eight children from a lower middle class, Catholic working family. Her father is a postman and her mother died of alcoholism. Kelly has her life planned to the last detail. She is going to have everything perfect. Then her husband loses his job and her world is turned upside down as she goes back to work when her baby is twelve-weeks-old. She struggles with exhaustion while she tries to do it all. Although she needs help, she refuses to let her husband do anything and is furious when he doesn't. He finally leaves her.

Little Earthquakes introduces the readers to these women, from how they met their husbands to what their lives are like after their babies are born. Through the friendship and help of her new friends, Lia learns life is never certain, but things could be much worse. Through opening up to her mother, she learns that she saw her father and mother through eyes that were completely warped. Her mother, whom she thought hated her, had been the stable, loving one and her father, whom she saw as loving and fun, had been unfaithful and absent. She calls her husband and he comes to get her.

Becky eventually becomes the one who is the peacemaker with her mother-in-law. When her husband finally has had enough, she knows she must step in, for her daughter Ava's sake. She wants her to have both grandmothers. She learns that love and understanding go a long way toward any relationship and tries to understand and love her mother-in-law.

Because of a frightening, potentially serious condition found in their son's heart, Ayinde and Richard reconcile. She realizes she loves him enough to want him back and that both she and Julian would be much worse off without him.

Kelly must come to the realization that life is never going to be perfect when she finds it impossible to balance her career and her baby's needs for her. She must give up her luxurious high-rise and move to a smaller place. When she swallows her pride and calls her sisters to confess everything really isn't "great!" they all advise her to call her husband. When she opens up to him, they talk things out and he comes back.

Although it's obvious that "the perfect life" may not be in the cards for any of these women, they learn that love and forgiveness are far more important than perfection.

More summaries and resources for teaching or studying Little Earthquakes.