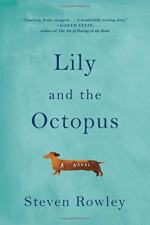 Lily and the Octopus Summary & Study Guide includes comprehensive information and analysis to help you understand the book. This study guide contains the following sections:

This detailed literature summary also contains Quotes and a Free Quiz on Lily and the Octopus by Steven Rowley.

Note: Citations in this study guide refer to the June 2016 Simon and Schuster first hardcover edition of Lily and the Octopus by Steven Rowley.

Lily and the Octopus is a novel by Steven Rowley in which forty-two-year-old Ted Flask must face the heartbreaking decision to put his beloved dog, Lily, to sleep. When the novel begins, Ted suddenly notices one night that Lily has a tumor on her head–something he will come to call the “octopus” because he looks at the tumor as though it was something squeezing the life out of Lily like an octopus. Ted imagines the octopus is alive, and is a creature that must be defeated in order to save Lily’s life. The octopus becomes Ted’s arch-nemesis.

Lily is a huge part of Ted’s life. She has been his constant companion for twelve and a half years and has been with him through all the trials of his life in that time, including the bad relationship he had with Jeffrey for six years. Ted does everything from watching movies to playing Monopoly with Lily, though Lily herself does not actually play Monopoly. Ted also imbues Lily with her own voice and speech, though she does not actually speak in words but instead through her actions and manners. Everything that Ted does, Lily is somehow made a part of.

Several options are given to Ted at the vet relating to Lily’s future. These include surgery, pills, and radiation, but surgery is determined by Ted to be out of the question because of Lily’s advanced age. Ted consults his mother and his best friend, Trent, about the situation. Both offer Ted reassurances. Ted, at the same time, goes to see a therapist named Jenny who helps Ted to recognize that his sadness and worry are a form of pre-grieving, with the idea being that Lily may not survive the octopus. Ted reluctantly accepts this and hates himself for imagining that there could be a time without Lily.

Seizures, temporary blindness, and pain follow for Lily as the tumor cannot be done away with. Attempts to deal with the tumor without surgery are shown metaphorically in the novel, with Ted and Lily boarding a fishing trawler and heading out to the open sea to battle the giant octopus intent on destroying them both. While the metaphorical octopus is defeated, the real octopus cannot be subdued. Ted must then make the heart-wrenching choice to put Lily to sleep. Ted is absolutely devastated and takes comfort in Trent’s friendship.

Ted also comes to realize that, since Jeffrey, he has not truly been living life. He has been depressed and trapped in his own little world, receiving much-needed comfort and kindness from Lily. He reflects kindly on the lessons Lily has taught him–such as showing spontaneous affection and always finding something to be optimistic about–and he begins applying these in his own life. As the novel comes to an end, Ted decides to go out on a date with a guy named Byron he has met online. Not only does he practice the lessons Lily has taught him, but Ted decides to tell Byron all about Lily.

Lily and the Octopus from BookRags. (c)2022 BookRags, Inc. All rights reserved.