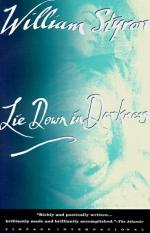 Lie Down in Darkness Setting & Symbolism

In Chapter 7, birds symbolize the men with whom Peyton Loftis has been intimate. Many of the birds she perceives as flightless. This could indicate the futility of guilt, or the young woman's inability to contain her unpredictable sexual compulsion. At one point, Peyton begins to hallucinate; she sees silent birds following her in the subway station. Also, birds serve as a reminder of the character's sense of disgust and self-loathing: "Guilt is the thing with feathers" (pg. 352).

The train travel featured in LIE DOWN IN DARKNESS gives the impression of time spread out and slow moving. Through the window of a train, one is able to visually take in one's surroundings. Also, the slower, more deliberate pace of a train counteracts the automobile travel featured in the story. Trains are also emblematic of the progression of human life. All journeys have distinct beginnings and unique endings...