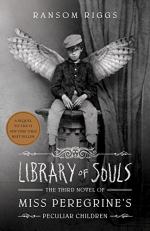 Ransom Riggs
This Study Guide consists of approximately 36 pages of chapter summaries, quotes, character analysis, themes, and more - everything you need to sharpen your knowledge of Library of Souls.

This detailed literature summary also contains Quotes and a Free Quiz on Library of Souls by Ransom Riggs.

“Library of Souls” is a young adult fantasy novel by Ransom Riggs, and is the third installment in his “Miss Peregrine’s Peculiar Children” trilogy. When the novel begins, Jacob, Emma, and Addison are fighting off Hollows and Wights that have attacked Miss Wren’s secret hideout where dozens of peculiar children have taken refuge. The Hollows and Wights, under the command of the evil Caul, have kidnapped the peculiar children and many ymbrynes, mother-like protectors, guardians, and guides of the peculiar world. Among them is Miss Peregrine. Jacob, Emma, and Addison aspire to get them back. The cross into present-day London to chase Caul’s forces. Under the London docks, they meet Sharon, a boat man who agrees to take them into Peculiar London.

In Peculiar London is an area best by criminals of the worst kind, called Devil’s Acre. There, Jacob, Emma, and Addison try to figure out how to break into Caul’s fortress. Addison attempts to sneak in, but is captured. Jacob and Emma then meet Myron Bentham, an intelligent explorer and inventor who knew Jacob’s father. Bentham reveals many startling things to Jacob and Emma. Among these are that he, Caul, and Miss Peregrine are siblings. Bentham also explains it was his fault that Hollowgasts and Wights exist at all.

Seeking power by feeding on the souls of peculiar children, Caul sought to find the legendary Library of Souls, where the souls of peculiars are kept and stored after death. They give the consumer immense power. Caul’s goal has always been to find the library and use it to take over the world. Bentham then sought to kill Caul and all his followers by closing the time loop they travel through, but only partially succeeds. In their place come Hollowgasts, essentially corpse-like versions of their former selves with no souls. When a Hollowgast has consumed enough peculiar souls, they are nearly restored to their former human state and become a Wight.

Nevertheless, Jacob and Emma rely on Bentham to use his home –a central point for loops –to get them inside Caul’s fortress in Devil’s Acre. Once there, Caul springs a trap on Jacob and Emma to capture them with Bentham’s help. Jacob, Emma, Miss Peregrine, Caul, Bentham, and a handful of Wights then venture through a loop to the Library of Souls. They come across a throne room with a fountain and pool for the consumption of souls. Caul begins the process by transforming himself into a hideous, gigantic beast. Bentham, who is power-hungry but not evil, sacrifices himself by giving Miss Peregrine the spell to shut down the loop as Bentham did once before. He then transforms himself into a hideous monster by consuming souls and attacking Caul. Miss Peregrine and her fellow ymbrynes successfully shut down the loop, ending Caul’s reign of terror.

More summaries and resources for teaching or studying Library of Souls.