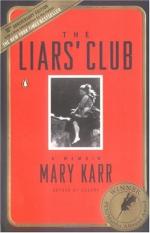 Mary Karr
This Study Guide consists of approximately 80 pages of chapter summaries, quotes, character analysis, themes, and more - everything you need to sharpen your knowledge of The Liars' Club.

The Liars' Club begins at a traumatic moment in Mary Karr's life, when she is seven. There has been a disturbance at her home in the town of Leechfield, Texas, as a result of which Mother is being taken from the house, having suffered a nervous breakdown. Mary and her nine-year-old sister Lecia are taken away by the sheriff and stay for a while elsewhere in the neighborhood.

Karr relates how her parents met and married and also tells of her father's childhood, explaining that she learned about these things by listening to the stories Daddy told to his drinking friends at the American Legion. This group of friends was known as the Liars' Club.

Mary's childhood is not easy. Her parents fight frequently, and although her mother threatens divorce, the couple stays together. Mary develops a sharp tongue, frequently using vulgar language she learned from...

More summaries and resources for teaching or studying The Liars' Club.

The Liars' Club from Gale. ©2005-2006 Thomson Gale, a part of the Thomson Corporation. All rights reserved.