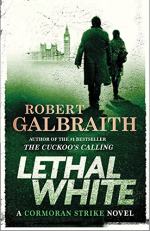 Robert Galbraith
This Study Guide consists of approximately 96 pages of chapter summaries, quotes, character analysis, themes, and more - everything you need to sharpen your knowledge of Lethal White.

The following version of this book was used to create this study guide: Galbraith, Robert. Lethal White. Sphere, 2018. Hardcover Edition.

The narrative begins with the Prologue at the point where the last installment in the series ended. Robin is at her wedding reception. She and her new husband, Matthew, argued on the way to the hotel due to the appearance of her then boss, Cormoran Strike, appeared at their wedding. The atmosphere between them is still tense as they take their wedding pictures. When they finish, both of them look for Strike, but do not see him. He is there, however. At the end of the previous installment of the series, he fired Robin. Now he wants to beg her to come back to work. She, in turn wants to beg him to let her return. She finally gets to talk to him, but the conversation is brief. As a result of it, she discovers that Strike tried to contact her, but she did not know because Matthew deleted the evidence on her phone. This leads her to return on wedding ring, but the couple agree to not end their marriage at their wedding reception. Later, she leaves Matthew during their first dance to talk to Strike. They agree that she will go back to work and this time she will have a contract. They hug each other before leaving, but break apart quickly.

A year later, Strike’s business is doing well and he has hired contract workers to help him. Robin has come back to work, but he feels as if their relationship is different than it was before. One day, a young man named Billy, who is obviously mentally ill, comes into the office claiming that he saw a child strangled when he was young. He runs away, however, before giving his address or explaining what he is talking about. He does, however, mention the name Jimmy and leave a hint of his address through the indentation of the paper he was writing on. Strike manages to find Jimmy, who is his brother, at a meeting of an organization is runs called CORE.

While he is at the meeting, Strike spots an undercover policeman. The policeman tells the Minister of Culture, Jasper Chiswell, that Strike was there. Chiswell, who is being blackmailed by Jimmy and the husband of Della Winn, the Minister of Sport, contacts Strike because he thinks that he was at the meeting to collect negative information about Jimmy. When he discovers that that was not the case, he hires Strike to uncover negative information about Jimmy and Winn so that he can fight their blackmail attempt. Robin works undercover in Chiswell’s office with his daughter Izzy and her half-brother Raphael who has gotten out of jail after serving time for a manslaughter charge. She is able to tape Winn’s conversations. After reading a letter addressed to Winn and talking to the person who wrote it, Robin discovers that Winn is embezzling money from one of his wife’s charities. This information is enough to stop Winn, but Jimmy is determined to make his voice heard. He attempts to do so at a reception for the Paralympics. Strike stops him, but creates a scene in the process at the reception. Robin is there as well and Chiswell says that he wants to see them the next morning at his home in the city. They know they are going to be fired due to the attention Jimmy and Strike bought to Chiswell. Robin stays at the reception to see whether she can get any more damaging information about Winn so that they can justify their last invoice. Strike does not leave immediately and while he is there, he runs into his ex-girlfriend, Charlotte, who is the woman he almost married.

The next morning, Robin arrives at Chiswell’s house and finds him dead. Robin takes pictures of the scene and Strike looks at it when he arrives soon after Robin. The police think that Chiswell’s death is a possible suicide, but has questions. So does Izzy. She thinks that Kinvara killed Chiswell and hires Strike to investigate. The investigation leads to the discovery that Raphael killed his father because he wanted revenge for being treated like a second-class member of the family. Raphael also discovers that his father neglected to put some valuable items in his will and tries to get one in particular, before the other members of the family discover its value. It is a painting by Stubbs that shows a mare who has lethal white syndrome. Raphael was having an affair with Kinvara as part of his plan. In addition, he told Flick, Jimmy’s girlfriend, about a job as a maid for Chiswell. She took it and learned information about the sale of the last gallows that Jimmy’s father made for Chiswell. They were sold after the death of Jimmy’s father and a portion of them were stolen, leading to the death of an innocent boy. Jimmy came to Chiswell because he wanted his father’s share of the money.

Throughout the entire time that Strike works for the Chiswell’s, he also tries to find out whether Billy’s story is valid or not. By the end of the narrative, he brings Billy and Izzy together. Izzy tells Billy that the child he saw strangled was Raphael and that Freddie was the aggressor. Billy is happy to finally know the truth.

In addition, Robin’s fragile marriage faces more stress during the investigation because Robin often chooses her work over Matthew. Matthew also thinks that she is choosing Strike over him. Then, Robin discovers that Matthew is having an affair with Sarah Sadlock and leaves him. Strike, in the meantime, has gotten over his lingering feelings for Charlotte. The narrative ends with the possibility of Strike and Robin being able to spend time with each other free of their previous emotional ties and deciding to take care of the physical and mental issues that make it difficult for them to do their jobs.

More summaries and resources for teaching or studying Lethal White.