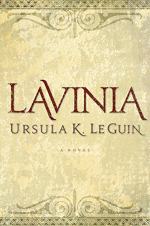 Related Topics
Always Coming Home
A Wizard of Earthsea
Tehanu: The Last Book of Earthsea
The Dispossessed
The Farthest Shore

Ursula K. Le Guin
This Study Guide consists of approximately 46 pages of chapter summaries, quotes, character analysis, themes, and more - everything you need to sharpen your knowledge of Lavinia.

The following version of this book was used to create the guide: Le Guin, Ursula K. Lavinia. Mariner Books, 2008.

Le Guin's novel presents a continuous text that does not feature numerical or otherwise definite chapter divisions. New sections of the text are indicated by a double-space between the new section and the one preceding it, and the new section of the text will feature a lead-in, in which the first several words are written in all capitalized letters. These breaks indicate a variety of shifts in the scene, mood, location, and time.

The novel opens with Lavinia gathering salt for a religious ceremony at the mouth of the Tiber river. During her trip to the salt beds she witnesses a fleet of warships entering the Tiber. When she returns home, she tells what she saw to her father, Latinus, who is the king. Latinus remarks that he did not realize they would come so soon, implying foreknowledge of the arrival of these ships.

Then follows an account of Lavinia's girlhood. Her father, Latinus, is an aging king, who in his younger years was secured his kingdom through war, but who now rules with prudence, diplomacy, and peace. Her mother, Amata, has come to resent her motherhood and her marriage to Latinus after her two sons die of sickness in their childhoods. During this time, Lavinia is courted by Turnus, a king of a nearby region. Turnus is young, attractive, and a fierce warrior. He is also Amata's nephew. Amata vehemently supports her daughter's marriage to Turnus. Latinus is hesitant to make the marriage, but he realizes that he must do so in order to insure the ongoing peace in Latium. Lavinia prefers to remain unwedded. Her chief desire is to remain a virgin, and to spend her life tending to the family hearth.

In the years over which this marriage is being plotted, Lavinia accompanies her father to a sacred shrine in the woods of Albunea. At night she is visited by the spirit of the poet who relates to her fate, and the larger series of events in which her life is bound up: the joining of the Trojan and Latin races. Lavinia learns from the poet that she is not fated to marry Turnus, but the Trojan foreigner, Aeneas. At Albunea, an oracle visits Latinus, telling him that he must marry his daughter to a foreigner.

Conflict arises when Latinus announces the oracle's message to the people of Laurentum, and that he will not marry Lavinia to Turnus. In response, Amata kidnaps Lavinia into the forest under the guise of celebrating a religious ceremony. Her true intention is to marry her to Turnus secretly. Lavinia escapes back to Laurentum. Fighting between the Trojans and Latins ensues, culminating in the death of Turnus, and the marriage of Lavinia to Aeneas. Lavinia and Aeneas establish a new city, Lavinium, in which they go to live and rule together.

The poet has told Lavinia in his foretelling of her future that Aeneas will reign as king for three years. The inconclusiveness of what will actually happen to Aeneas after those three years afflicts Lavinia with worry and uncertainty, as she presumes that Aeneas will die. Lavinia worries that her time with Aeneas is wasted when he is away securing alliances with other rulers. During this time, Lavinia gives birth to a son, Silvius. In Aeneas' absence abroad, Ascanius proves to be a violent and imprudent ruler. He is sent away to the Alban Hills to govern the borders where he involves the Latins in a number of armed conflicts. During one such outbreak, Aeneas is killed by a spear, ending his reign as king exactly three years from when the poet made his prophecy to Lavinia.

Ascanius becomes king after Aeneas' death. He moves the seat of government from Lavinium to Alba Longa. During this time, Latinus dies, leaving Ascanius the sole king of Latium. Ascanius' rule is marked by endless military combat and the ruin of peaceful alliances built by Latinus and Aeneas. Ascanius allows Lavinia to move back to Lavinium now that he intends to marry, however he stipulates that Silvius must remain in Alba Longa to be raised in his charge. Lavinia opposes this command, and she secretly brings Silvius back to Lavinium with her. When Ascanius sends messengers to retrieve Silvius, Lavinia retreats with her son into the forests. She takes Silvius to Albunea. While there, she receives an oracle requiring that she raise Silvius in the woods. Ascanius yields to the conclusions of the oracle, and leaves Lavinia to raise Silvius unbothered.

In time, Silvius becomes the king of Latium after Ascanius resigns his duties. Silvius restores peace and rebuilds the alliances that Latinus and Aeneas had maintained. He marries and has a number of sons and daughters. Lavinia grows to old age happily as a grandmother. At the end, Lavinia expresses that she has not died, but has metamorphosed into an owl.

More summaries and resources for teaching or studying Lavinia.