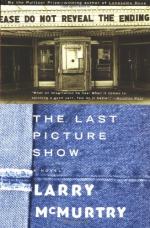 Larry McMurtry
This Study Guide consists of approximately 69 pages of chapter summaries, quotes, character analysis, themes, and more - everything you need to sharpen your knowledge of The Last Picture Show.

This detailed literature summary also contains Related Titles and a Free Quiz on The Last Picture Show by Larry McMurtry.

In the mid-1950s, Sonny Crawford and his best friend Dwayne are high school seniors in the small town of Thalia, Texas. Both boys play football, hang out at the pool hall and obsess about sex. Dwayne dates Jacy Farrow, the richest, prettiest girl in town, and Sonny dates Charlene Duggs, an unattractive and unpleasant classmate. As the novel begins, Sonny is overwhelmed by the loneliness of the town and his dissatisfaction with his dating prospects. Sonny dumps Charlene after a night at the picture show and begins an affair with Ruth Popper, the football coach's attractive but neglected wife. Sonny enjoys having sex with Ruth and accepts that she is in love with him.

Meanwhile, Dwayne does his best to get Jacy to have sex with him, but she is gradually lured away to a faster, wilder crowd of rich kids from Wichita. Jacy is a selfish, manipulative girl, constantly seeking the attention of her parents and the town. Jacy's mother Lois was once the prettiest, liveliest girl in town, but she is now an unhappy alcoholic in a miserable marriage. Sam the Lion owns Thalia's pool hall and keeps an eye out for Sonny, Dwayne and Billy, a mentally challenged boy who Sam took in after Billy's father abandoned him. Sonny and Dwayne go on a road trip to Mexico, and while they are out of town, Sam the Lion has a stroke and dies. He leaves the pool hall to Sonny and Billy.

Jacy starts going to naked swimming parties in Wichita and develops a crush on Bobby Sheen. It is only when Jacy learns that her virginity is a turn off to Bobby that she decides to sleep with Dwayne on the class trip to San Francisco. She dumps Dwayne afterwards and begins her process of seducing Bobby. She sleeps with him once, and then he runs off to marry his girlfriend to Jacy's annoyance. Dwayne is so depressed about losing Jacy that he moves to Midland. Jacy sleeps with her mother's lover, Abilene, and after he fails to fall in love with her, she is so depressed and bored that she decides to break up Sonny and Ruth. When Jacy shows Sonny that she wants to date him, Sonny stops going to see Ruth, leaving her brokenhearted. Dwayne finds out about Jacy and Sonny and hits Sonny in the face with a beer bottle, seriously injuring his eye.

Jacy tells Sonny she wants to marry him, and they run off to Oklahoma. Jacy only does it because she knows her parents will find them and have the marriage annulled, which they do. As Lois drives the dejected Sonny back to Thalia, she sleeps with him in a roadside motel, and Sonny realizes how badly he treated Ruth. As football season starts, Sonny feels lost and empty in Thalia, like he has disappeared. The picture show closes, and Dwayne leaves for Korea. A trucker runs over Billy one morning, and Sonny is so distraught he goes to Ruth's house. Ruth is furious, but she realizes that her decision is not whether to forgive Sonny, but whether she is brave enough to face being hurt by him again. As the novel ends, Ruth and Sonny sit holding hands in her kitchen, facing an uncertain future.

More summaries and resources for teaching or studying The Last Picture Show.