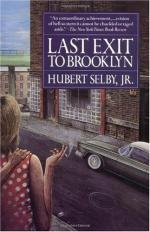 Hubert Selby Jr.
This Study Guide consists of approximately 36 pages of chapter summaries, quotes, character analysis, themes, and more - everything you need to sharpen your knowledge of Last Exit to Brooklyn.

This detailed literature summary also contains Topics for Discussion and a Free Quiz on Last Exit to Brooklyn by Hubert Selby Jr..

Last Exit to Brooklyn is a 1956 novel written by Hubert Selby Junior. It is a series of loosely connected tales about the New York neighborhood of Brooklyn in the fifties, which at the time was renowned for its poverty, drugs, and violence.

The first story is called Another Day Another Dollar. It examines a bunch of unemployed men in their twenties who resort to casual violence to get away from the boredom of their lives. The second tale is called The Queen is Dead and it follows the transvestite Georgette and her unrequited love for the good-looking Vinnie. And Baby Makes Three is a relatively happy story about a couple who marry when the girl gets pregnant. In contrast, the story of Tralala is a tragic tale of a prostitute unable to feel love. The Strike is the novel's longest tale and follows the exploits of factory worker Harry Black. The final story is called Coda. It is a collection of vignettes all set in the same Brooklyn housing scheme.

In Another Day Another Dollar Freddie, Vince, Tony and Harry hang around in the Greek bar in Brooklyn. A sailor puts on a record they do not like so they wander outside, chatting about cars and girls. Soon the conversation degenerates into a violent game called Mum. Back in the bar and still looking for something to do, Freddie flirts with a prostitute called Rosie. He decides he wants nothing more to do with her, but she still follows him outside. When Freddie becomes aggressive towards her, some sailors approach him and his friends. Minutes later a fight breaks out. The boys beat up one sailor until he lies unconscious in pool of his own blood and vomit.

Georgette is a hip transvestite in love with a criminal called Vinnie. Vinnie enjoys Georgette's attentions, but cannot stop himself from treating her badly. In this story, he joins his friends in teasing Georgette by throwing a knife towards her until one sticks in her leg. Not wanting trouble from the police, Vinnie goes against Georgette's wishes to take her to hospital and sends her home in a taxi. Here Georgette has an argument with her brother who refuses to accept Georgette's way of life. When her mother falls asleep, Georgette goes to her friend's house for drink and drugs. Vinnie and his friends arrive and Georgette becomes increasingly obsessed with attracting his attention. She becomes so high that she manages to convince herself one of the other men is Vinnie and takes him to bed.

In And Baby Makes it Three, Tommy gets his girlfriend Suzy pregnant and decides to marry her. Though Suzy's father is initially unhappy with the arrangement, he soon realizes Tommy is a likeable boy with a job good enough to buy himself a motorbike. In particular, a boy called Spook often hangs around Tommy looking for him to take him for bike rides. Spook's goal in life is to get a bike for himself and he goes as far wearing a motorbike hat wherever he goes. On the day Tommy tells his friends he is getting married, Spook comes in to the bar with news that he has just bought his first bike. The wedding and christening celebrations are arranged for the next day. It is a lavish affair and continues through the night. As everyone starts to head home, Tommy promises to take Spook for a ride. However, while Spook goes to fetch his hat, Tommy rides off with a girl called Roberta.

Tralala has been a prostitute since the age of 15 and unlike the other girls, she claims she is successful because she does not tease the men. Her most lucrative customers are sailors. Her ploy is to get them drunk before luring them outside and waiting for one of her friends to knock them out. While they are unconscious, they take any money or jewellery they find on their person. For the first time, Tralala decides to earn some money by herself by stealing money from her customer when he falls over drunk. However, the customer catches up with her and begs Tralala to give back his ID, otherwise, he says, he can't go home. Tralala and her friends violently beat him up. After the police arrest her friends, Tralala decides she is too good for hanging around Brooklyn and heads to Times Square where she meets an officer. The officer shows Tralala a great time and the only thing he asks Tralala to do is see him off at the port. Thinking he will pay her there, she happily goes along. All she receives from him is a love letter. For the next few days, Tralala goes on self-destructive binge that ends in a group of men raping her.

Harry works at a factory and lives in a loveless marriage with his wife Mary. His dull life completely changes when he becomes a central figure of a strike at his workplace. As one of the representatives, the union puts him in charge of the pickets and gives him his own office. It is not long before Harry realizes he can use the trade union funds for his own means, buying beer and sharing good times with some of the local boys. The local boys don't like him, but they see he is there to be used. It is in their company that Harry meets a transvestite. The transvestite arouses Harry's interest and he starts frequenting gay clubs. While splashing his money around in a transvestite bar called Mary's, Harry meets and falls in love with Regina. For a while, he lives a dream, living with her, and taking her out to fancy restaurants. It does not last long. When the strike ends and he no longer has union funds to spend, Regina walks away from him. A confused Harry, walks to the Greek bar where outside he meets a ten-year-old boy called Joey. He tries to have sex with Joey but Joes escapes and come back with some men from the nearby Greek bar. The men beat Harry to a pulp.

Coda examines the lives of various characters on a Brooklyn housing estate. Abraham has a Cadillac and fancies himself as a stud. He is obsessed with a light brown-skinned girl called Lucy. Although he gets her, he does it at the expense of his wife and children. Mike is unemployed and does little but sleep all day. In comparison, his wife Irene works six days a week. One day, she comes back from work in a happy mood to see her husband drinking with Sal. Her mood disappears when Mike orders her to cook steak and then leaves immediately after the meal. Ada is a Jewish woman who others on the estate mock. She spends all day thinking about her dead husband and son, hoping if she sits outside that someone will speak to her. Her sweet attitude seems are odds with the violence and nastiness that surrounds her.

More summaries and resources for teaching or studying Last Exit to Brooklyn.