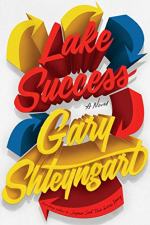 The novel’s protagonist is Barry Cohen, a highly successful hedge fund manager who lives in New York City. His firm is being investigated by the federal government for possible illegal stock activity. Barry is married to Seema, a woman of Indian descent who was a successful lawyer before she married Barry. Together, they have a three-year-old son named Shiva. Shiva is nonverbal autistic, and both Barry and Seema are quite stressed by the diagnosis. One day, after a heated argument between Barry and Seema, Barry decides to flee New York in search of a new life. He withdraws cash, throws away his cell phone and credit cards, and boards a Greyhound bus heading south. Soon after Barry’s departure, Seema begins to flirt with Luis Goodman, a married writer who lives in the same expensive apartment building.

Barry exits the bus in Baltimore and meets a drug dealer named Javon in a socioeconomically disadvantaged neighborhood. Barry briefly forms a good rapport with Javon and fantasizes about taking on Javon as a business protégé. Barry the takes a bus to Richmond, Virginia, which is where the parents of Layla Hayes (Barry’s ex-girlfriend form college) live. They inform Barry that Layla is divorced, has a child, and lives in El Paso, Texas. Meanwhile, Seema and Luis continue to go on secret dates, and Seema begins to fall in love with Luis. However, at the same time, Luis’ wife Julianna befriends Seema. Julianna arranges a play date between her son and Shiva. During the play date, to Seema’s surprise, Julianna proves adept at calming and managing Shiva.

Barry arrives in Atlanta, Georgia and goes to the home of Jeff Park, a former employee of Barry’s hedge fund. Jeff was fired from the hedge fund after making a costly clerical error. Nonetheless, Jeff lets Barry stay in his home for a few days. However, Jeff eventually vocalizes his belief that Barry employs unethical business practices. Barry boards another bus, and in Alabama, he meets an attractive African-American woman named Brooklyn. Barry feels attract to her, but he also has the urge to mentor her. They have sex in a hotel room, and, to Barry’s dismay, she leaves in the morning. Meanwhile, Seema and Luis have an argument after she tells Luis about Shiva’s autism. Seems begins falling out of love with Luis. She then tells her parents about Shiva’s autism, which she has kept a secret from them.

Barry arrives in El Paso, and Layla allows him to live with her temporarily. Barry bonds with Layla’s nine-year-old son Jonah. Layla and Barry develop a sexual relationship. Barry fantasizes about marrying Layla and being a father to Jonah. However, Layla eventually forces him to leave, as she does not want to have a long-term relationship with him. Barry continues to travel west, but he is eventually arrested and brought back to New York. The federal government is in possession of an incriminating video of Barry, which Seema sent them months before. The video proves that Barry committed insider trading, but he only receives a fine and no jail time. Barry and Seema then try unsuccessfully to resume their relationship. They eventually divorce, and Seema later marries a man of Indian descent. Barry continues to work in finance and make a lot of money, but he works with new moral scruples. He is uninvolved in raising Shiva, but he does provide money for Shiva’s care and education, and he pays to have a lavish bar mitzvah for Shiva when Shiva turns 13.