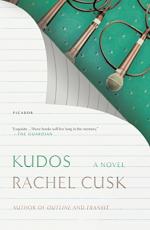 Rachel Cusk
This Study Guide consists of approximately 54 pages of chapter summaries, quotes, character analysis, themes, and more - everything you need to sharpen your knowledge of Kudos.

This detailed literature summary also contains Quotes and a Free Quiz on Kudos by Rachel Cusk.

The following version of this book was used to create the guide: Cusk, Rachel. Kudos. Farrar, Straus and Giroux, 2018.

At the novel’s outset, Faye sat next to an exceptionally tall man on a plane, en route to a literary festival in an unnamed European city. Faye and the man got to talking, and the man told her about his family life and his career as the director of a global management company, a position from which he had recently retired. The man told Faye a long story about his family’s dog, Pilot, who had cancer, and whom the man had recently had to put down while his family was away.

Faye then arrived at her hotel in the unnamed city. Before participating in an event at the literary festival, Faye met her foreign publisher at a hotel bar. The publisher was exceedingly youthful, and explained to Faye that he had recently been promoted to head of the publishing firm, after a successful career in sales. He had personally altered the profitability of the publishing house by publishing fewer difficult literary novels, and more fun gaming books. The two were joined by Linda, another writer, who had recently returned from a literary retreat at the home of a wealthy countess in Italy, where, in Linda’s view, writers had shamefully abased themselves for the countess’ favor.

After the literary event with Linda, Faye met a newspaper reporter in the hotel’s garden. The reporter, who Faye had met more than 10 years before, told Faye a long story about watching her sister’s marriage dissolve (which she originally couched as a story about a friend), and the odd sense of pleasure the reporter felt during this terrible time for her sister. The reporter, who never asked Faye a single question, casually mentioned that she had read that Faye had recently been remarried.

That evening, Faye attended a party associated with the literary festival in the city’s downtown area. A young man named Hermann, the son of the festival’s organizer, walked Faye and a group of writers from the hotel to the party, during which time he discussed his love of the sciences, and his suspicion of narrative, with Faye. At the party, Faye waited in line for a buffet dinner and talked with Gerta, a wealthy heiress who told Faye about her disdain for literary events, compared with her enjoyment of actual literature. Gerta then introduced Faye to Ryan, a writer who Faye had met years before. Ryan had achieved newfound success as a writer of commercial fiction, which he undertook under a pseudonym. Ryan, in the years since they had last met, had lost half his body weight (a triumph he credited to the acquisition of a smart watch) and had developed a new dedication to his appearance.

Faye travelled to yet another literary conference, presumably in the same country. The organizers of this conference set up lodging for the attendees in a hotel in the suburbs, and bused the writers into the city for their events and for meals. While she waited for the bus to take her to a local restaurant, Faye struck up a conversation with Sophia, a novelist who lived nearby, and who was known locally not for her fiction but from her work as a translator. The woman told Faye about how her work as a translator often involved gaining male writers a wider audience, while her own creative work remained largely ignored. Sophia also introduced Faye to Luis, a successful writer who had won all of the anonymous country’s major literary prizes, for his fiction exploring the “ordinary life of the suburbs” (183). Over a meal with Luis, a newspaper reporter and a Welsh novelist, Sophia told Faye that she felt that Luis’ success derived at least in part from his gender.

The next morning, Faye was again waiting for a bus when she met a man named Eduardo. The two discussed the weather, which prompted the man to tell Faye a story about his son, who was unambitious and fatalistic, and felt that the impending end of the world was largely deserved. The bus arrived, and Faye went to meet Paola, another of her foreign language publishers. Paola had arranged for Faye to give several interviews at a luxury hotel, which had once been a bookstore. The first of these interviews was with a serious man who used all the time allotted for their conversation explaining his methodology as an interviewer and his opinions about contemporary literature. The second of the interviews, with a young woman who anchored a TV arts program, was aborted because of broken recording equipment, but not before the TV anchor told Faye her opinions about “the problem of recognition for female writers and artists” (189). The final interview was with a young man who encouraged Faye to leave England and relocate in the local, Mediterranean climate, where she would be happier, a proposition Faye challenged.

After the series of strange and largely one-sided interviews (the interviewers having done most of the talking) Faye and Paola walked to a local restaurant. On the way, Paola wanted to stop at a local church, whose interior had been burned in a fire years before. Paola wanted to show Faye what she described as the beautiful, blackened interior of the church, but when they got there, the door was locked. In front of the church, Faye nearly fainted from the city’s heat. Faye and Paola eventually made it to the local restaurant, where they met Felicia, a woman who had translated some of Faye’s writing. Felicia was having a bad day: her ex-husband had recently reclaimed their shared car and had generally been making her life difficult. Paola, who had also gone through a dramatic divorce, asked Faye why she had remarried, and Faye changed the subject.

That evening, Faye took a taxi to the beach. Walking toward the waves, she received a phone call from her son, back in England, who told her that he and some friends had accidentally started a small fire in an apartment complex, and was fearing the consequences for his actions. Faye comforted him. Meanwhile, Faye walked past a group of naked men around a fire on the beach. Faye ignored them and went swimming. The novel ends when one of the naked men approached her and urinated into the waves in front of her.

More summaries and resources for teaching or studying Kudos.