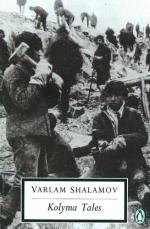 Varlam Shalamov
This Study Guide consists of approximately 38 pages of chapter summaries, quotes, character analysis, themes, and more - everything you need to sharpen your knowledge of Kolyma Tales.

He took from the ashes of the fire a large stone and shoved it into the sack. "They don't untie them there," he said frowning. "Now we've met our quota."
P. 25, "A Pushover Job," Convict to Narrator.

A scrawny intellectual lasted longer than some country giant, even when the latter had formerly been a manual laborer.
P. 29, "Shock Therapy."

Clean underwear is a pure lottery, and I felt a strange and terrible pity at seeing adult men crying over the injustice of receiving worn-out clean underwear in exchange for dirty good underwear.
P. 44, "In the Bathhouse."

His own case was so trivial (writing letters to his fiancee) that the only proof of agitation (Article 58, Point 10) consisted of their correspondence. His "organization" (Point 11of the same article) consisted of two people.
P. 59, "Dry Rations."