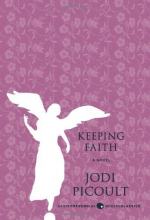 Jodi Picoult
This Study Guide consists of approximately 42 pages of chapter summaries, quotes, character analysis, themes, and more - everything you need to sharpen your knowledge of Keeping Faith.

This detailed literature summary also contains Topics for Discussion and a Free Quiz on Keeping Faith by Jodi Picoult.

Mariah and her daughter, Faith, go to visit Mariah's mother, who has purchased a new "coffin table." The table is apparently a usable coffin that is to serve as a coffee table until it's needed as a casket. They leave and are nearing the ballet studio, when Faith realizes she's forgotten her leotard. They return to the house, find Colin is at home and rush upstairs only to discover that both Colin and another woman are showering.

Three days pass. Mariah pulls herself together only by realizing that she must - for Faith. She holds to the hope that Colin will return, until she's served with divorce papers. The divorce is fairly quick, but then Faith begins talking about an "imaginary friend." She refers to this friend as "her guard," and it a psychiatrist suggests that Faith is seeing God. Faith herself doesn't realize this until her grandmother, Millie, collapses while Mariah cries, "Oh, God."

Faith's psychiatrist takes the story of Faith - without using her name - to a psychiatric symposium. A reporter who is covering the event picks up on the story and prompts the attention of other media outlets, including Ian Fletcher, a self-proclaimed "anti-evangelist." Reporters, religious zealots and ill people hoping for a miracle healing converge on the White home. After Millie collapses, is pronounced dead and is "resurrected" by Faith, the attention becomes intense. When Colin hears of the situation, he sues for custody, and there follows a bitter custody battle. It's during this time that Mariah's self-doubts of her ability to be a good mother begin to dissipate as she realizes that the tie between herself and her daughter are strong. It's Mariah who says that she believes whatever Faith tells her she (Faith) feels and sees. And it's that belief in her child that eventually catches the attention of the judge who decides the case.

Through it all, Ian Fletcher remains a true skeptic - until the time he accidentally encounters Mariah and Faith on the run from both the media and Colin's threats to take custody of Faith. Though Ian maintains his disbelief, he comes to hope that Faith can perform a miracle, and that she will heal his autistic brother. When Ian has a moment with his brother as the lucid, teasing man he'd always hoped Michael would be, he comes to believe, though he won't admit fully to having a change of heart.

Through the horrors of a court trial, Mariah comes to understand that she doesn't have to be perfect in order to be a good mother. The attraction that she and Ian feel toward each other will eventually have the opportunity to grow. Faith holds onto her power for several months, but there comes a day when she is alone in her room - talking to nobody.

More summaries and resources for teaching or studying Keeping Faith.