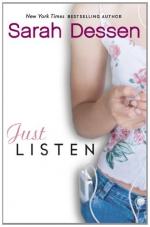 Sarah Dessen
This Study Guide consists of approximately 48 pages of chapter summaries, quotes, character analysis, themes, and more - everything you need to sharpen your knowledge of Just Listen.

Annabel Greene lives with her family in a house with one side made of glass. She often thinks about what people see when they look in, knowing that appearances are deceiving. On the surface, they look like any other normal family. From the outside looking in, no one would ever realize how far from normal they really are. Everyone in the family has issues of one sort or another.

Whitney suffers from an eating disorder; Kirsten has communication issues; their mother suffered an almost paralyzing bout of depression; their father avoids in-depth conversations about feelings whenever possible; and Annabel prefers to keep her feelings to herself, shielding those she cares about from pain whenever possible and avoiding conflict at all costs. She still considers herself to be reasonably stable, despite the fact that Sophie's boyfriend Will tried to rape her, Sophie thought she seduced him, and everyone in her school subsequently treated her like a leper. Annabel keeps the truth of it to herself, preferring not to turn her life into a spectacle and unsure who her schoolmates would believe. The wound remains however and it festers.

Annabel lets her inner demons prevent her friendship with Owen from developing and keeps her from pursuing Clarke to get her forgiveness for her thoughtless behavior with Sophie. It stops her from going to see Emily and telling her how sorry she is because she knew what Emily was going through now. She watches as her older sisters grow and progress, Whitney conquering her self-destructive behavior and Kirsten learning how to listen as part of her contribution to communication. Annabel has the same opportunity for growth when Owen promises she can tell him anything, but at the last moment she caves. She carries the pain and guilt in secrecy until the last day before Christmas break when everything begins to unravel. Emily seeks her out and reveals that she knows what likely happened between her and Will at the party. Should she want to set the record straight and ensure he pays for it, she could do so by calling the woman Emily herself has been dealing with. Then she runs into Clarke who tells her that Owen is worried about her and so is she. It isn't until she learns to listen to her own inner voice that she realizes that she can't hide from the truth anymore.

The first person that she confides in is Owen. With his response and support, she finds the strength to keep talking, healing herself a little more each time. When he promises to go with her to court, even that seem less frightening to her, but to her surprise, he doesn't show up. Annabel testifies, with her family there to support her, and afterward sees Owen standing outside. She is angry and confused until she puts the pieces together and Owen fills in the blanks. He had been so angry with Will after she told him what happened that he confronted him outside Bendo and hit him, giving him the black eye Annabel noticed in the courtroom. It is a act of chivalry that violates his probation and would have him back in jail if anyone lodged a complaint or called the police, but Owen is lucky. The worst thing that happens as a result is that his mother grounds him, and even just getting out to see her now had been a battle. It isn't the only punishment that he faces either. For six weeks he is forbidden to host his radio show, so Annabel fills in for him. Life will never go back to how it was for Annabel before the incident with Will, but it goes forward. Annabel, Emily, Owen, and Clarke find a new equilibrium, and begin building on it and Annabel begins learning how to trust.

More summaries and resources for teaching or studying Just Listen.