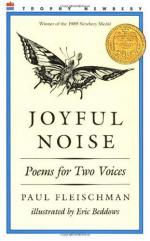 "Mayflies" describes the short life of the mayfly, with its birth and death taking place in one day. They spend their only twenty-four hours of life frantically flying about and mating. It is interesting to see from their perspective regarding the length of their lives; they see twenty-four hours as a relatively long time, as they see their youth, only a few hours before, as "so very long ago" (p. 10). "Fireflies" tells of the light that makes a firefly truly distinct among insects. The poet compares the light to ink, calligraphy, and penmanship, as well as painting and brush strokes. To emphasize the powerful and image-provoking verbs used by the poet, he has placed verbs beginning with the same letter adjacent to each other, such as glimmering, gleaming, and glowing.

"Mayflies" matter-of-factly tells of the...

(read more from the Mayflies and Fireflies Summary)