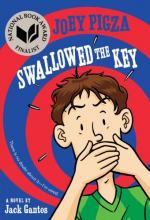 Plot Summary
+Chapters Summary and Analysis
Off the Wall and Family Tree
Handful and Go Fish
Make a Wish and Who
Gifted and Talented and Suspended
Bad Seed and The Crossing
Shifting Gears and Pittsburgh
Moon Man, The Patch, and Picture Me Here
Free Quiz
Characters
Objects/Places
Themes
Style
Quotes
Topics for Discussion
Order our Joey Pigza Swallowed the Key Study Guide

Jack Gantos
This Study Guide consists of approximately 34 pages of chapter summaries, quotes, character analysis, themes, and more - everything you need to sharpen your knowledge of Joey Pigza Swallowed the Key.

This detailed literature summary also contains Topics for Discussion and a Free Quiz on Joey Pigza Swallowed the Key by Jack Gantos.

"Joey Pigza Swallowed the Key" by Jack Gantos is the story of young Joey Pigza, who suffers from attention deficit disorder. The story follows Joey, showing the journey of a boy on a path of destruction who through medication, care, and behavioral modification is able to become a productive member of his class.

Joey tells the story and knows that he is not like other children. He knows that his actions sometimes are wrong, but he feels unable to control himself. Joey is not a bad child, but his actions often lead to bad results. His medication for ADHD appear to last only through the morning, and his afternoon behavior is therefore out of control. His father abandoned him and his mother when Joey was in kindergarten. Joey's mother, Fran, who is an alcoholic, followed his father, and left Joey in the care of his grandmother. Years later she returned, and attempted to smoothly transition herself back into the role as primary caregiver. While she was away, however, she learns that her mother physically and mentally abused Joey. While this was not the cause of his misbehavior, it did have an effect. Ms. Pigza settles in, but Grandma cannot tolerate the new rules of her household. After attempting to close Joey in a refrigerator one day, Grandma leaves, and does not return. Ms. Pigza explains that his grandmother, too, is hyperactive, as is his father, Carter.

Joey's actions often involve decisions that only hurt himself. One day he absentmindedly swallows his house key. On another, he attempts to sharpen his finger in a pencil sharpener, and is cut. His teachers, attempting to find a solution, place him into a special education class for several hours each day, in the hopes that he can learn how to behave like other children. However during an outing to an Amish farm, Joey eats an entire pie, jumps from a loft, and sprains his ankle. Finally, Joey is running with scissors in a classroom when he trips, and cuts off the end of another student's nose. Unable to tolerate his behavior any longer, the school sends Joey to a special education school, where he can learn to make better decisions and where the staff is better able to treat his ADHD.

Joey is introduced to several special education students, as well as to Mr. Ed Vanness, a caseworker. Special Ed explains to Joey that to help him, they have to help him find the right medication, and test him to make sure he is being properly treated. Ed explains to him that his home life is part of the problem, as are his past experiences. Joey is taken to see a doctor, who refers him to another doctor in Pittsburgh for a SPECT test or a brain scan. The scans show his brain is normal, and he is given a patch that doses his medication continuously throughout the day. oey begins to finally believe he can improve. He knows he cannot be cured, but also knows that by making good decisions and taking his medication, he can be like other children.

More summaries and resources for teaching or studying Joey Pigza Swallowed the Key.