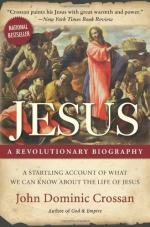 This detailed literature summary also contains Topics for Discussion and a Free Quiz on Jesus: A Revolutionary Biography by John Dominic Crossan.

This detailed analysis of Biblical writings about the life of Jesus considers his life and work within the context of the historically documented circumstances of his time. The analysis covers social, political, economic, and spiritual considerations. These considerations are all grounded in the central thematic contention that Jesus was a radical liberal activist, seeking moral justice for all and increased openness to faith by all. A secondary component of this analysis is the contention that the Bible is not and was never intended as a literal recounting of actual events, but is instead to be read and interpreted as a metaphoric commentary on ways that human beings could enter into a closer relationship with God.

In the book's Prologue, the author outlines both his intent and his motivation, clearly indicating that in researching and formulating his analysis, he is not attempting to undermine Christian faith but to look at both additional and alternative ways of interpreting and understanding the foundations of that faith as defined in the New Testament of the Bible.

The author then begins the analysis proper by examining the circumstances of Jesus' birth, specifically his family, community life, and the social, political, and economic ways of the world into which he came. He proposes the theory that the writings about those circumstances were shaped and defined by the authors' intent to connect Jesus, theologically, spiritually, and historically, with past Hebrew leaders and prophecies. The author continues his analysis on these two levels in the following sections, exploring how Biblical references to other important Christian figures like John the Baptist, Pontius Pilate, and Barabbas were both defined by historical context and the need of the original writers of the Bible to shore up the Christian faith with references to the Old Testament.

A substantial portion of the book is taken up with the author's consideration and analysis of Jesus' teachings as a manifestation of his quest for social justice. He specifically considers Biblical references to Jesus' advocacy on behalf of the poor and the ill, delving deeply into both those references and the history of the time. His contention is that Jesus was a radical activist, a liberal determined to break down society's traditional, constructive ways of functioning. He goes into detailed explanations of just what those ways were and how Jesus' attitudes and actions confronted the dehumanizing qualities of those ways, all with an eye to opening both faith and day to day prosperity to a broader and deeper range of people.

Throughout the book, the author demonstrates how the writings in the Bible should not be taken as literal accounts of actual events but as metaphorical, symbolic manifestations of Jesus' spiritual intent ... specifically, his determination (as discussed above) to open both the Kingdom of God and the life of the world to more people. As part of this demonstration, he offers examples of how the meanings of words, phrases and images can be transformed by translation and interpretation, suggesting as he does so that the Bible is, in fact, a succession of interpretations, shaped and defined by its authors in order to perpetuate their attempts to build the Christian faith.

The final sections of the book consider the Biblical narratives of the crucifixion and resurrection, and how the probable facts of what happened were shaped and re-defined by later Christian writers to reflect their belief that the man they came to believe was the Messiah could not possibly have been treated in the meaningless, inhumane way history suggests he was. Here the author comes closer than anywhere else in the book to what many would call heresy, suggesting that the historical reality of the time in which Jesus lived and died suggests that many of the events of that crucial time simply could not have happened and that many of the "Facts" presented in the Bible were, again, interpretations.

In his Epilogue, the author summarizes the events of Jesus' life under consideration, briefly outlines the history of how the books of the Bible were compiled and edited, and suggests that the Christian faith can only benefit from increased examination of the context through which both it and the writings about it developed and were defined.