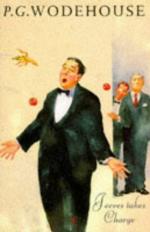 Study and discuss the titles and rankings of English nobility. By what process does one become a "Sir" or "Lord?"

Compare other well-known satirical writers, such as Mark Twain or Kurt Vonegut, to P. G. Wodehouse. Discuss the similarities and differences in their styles and subjects.

Research the history of England during the early 1900s. Discuss the economy and society of the period. Describe the fads and fashions of Edwardian England.

Study the role of the butler or valet in the Nineteenth and Twentieth centuries and write an essay comparing the reality of the position with the way that it has been portrayed in popular media such as film and television.

Read several of the "Jeeves and Wooster" stories. Once you are familiar with the various characters and plots, attempt to write a scene (or story) of your own using the characters...