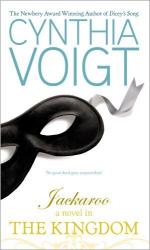 1. Are Gwyn's adventures as Jackaroo believable? If yes, what makes them so? If not, why are they not plausible?

2. Gwyn's family did not come to her defense when the Lord, believing his son was dead, threatened to kill her.

Do you condemn or excuse them? Consider the time in which they lived and explain your answer.

3. The story has a happy ending with Gwyn and Burl married and living safely in a new country. Is this ending believable? Explain your answer.

4. Who understands Gwyn better, her mother or her father? Defend your answer with evidence from the novel.

5. When Gaderian taught Gwyn how to read, he was breaking the law. Why would the rulers make such a law? Has there ever really been such a law?

6. Consider the character of Tad, Gwyn's young brother, noting and identifying how he changes as the...