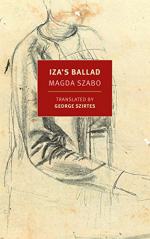 Magda Szabo
This Study Guide consists of approximately 63 pages of chapter summaries, quotes, character analysis, themes, and more - everything you need to sharpen your knowledge of Iza's Ballad.

The following Kindle edition of this book was used to create this study guide: Svabo, Magda. Iza's Ballad. Harvill Secker, 2017.

Iza's Ballad is a story of the relationship between a mother, Ettie, and her daughter, Iza, following the death of their husband and father, Vince. With different ways of viewing the world, the novel explores the women’s new life. They try to live together and find ways to support each other, while also adjusting to the changes that Vince's death has caused.

At the beginning of the novel, Ettie is at home, making toast over the fire, when her former son-in-law, Antal, comes to tell her that Vince is nearing death, and to take her to the clinic to say her goodbyes. Iza is not there, but returns home from Budapest by the time Ettie gets back from the clinic, now a widow. Ettie had a difficult time at the clinic, first in having to accept that Vince was about to die, and then in managing the intrusive presence of his nurse, Lidia, who held his hand as he passed away.

Upon her return home, Ettie worries about what will happen to her, living alone in their house without Vince or anyone else for support. Her fears are assuaged, however, when Iza tells her that she will come to Budapest and live in her apartment, and that she will make all the arrangements for the funeral, sale of the house, and move to the city. Antal comes to visit to pay his respects and offer to move in with Ettie to help her, but is told that she will be moving to Budapest with Iza. He later offers to buy the house, a solution that pleases Ettie greatly and Iza ultimately approves.

On the day of the funeral, Ettie is excited to get to see Vince one last time, but is distraught that the coffin has already been closed. After leaving the cemetery, she is further discomforted when Iza puts her on a bus to the spa in Dorozs for a few days, while she remains behind to arrange the move to Budapest. She does not arrive in Dorozs for another week, and when Ettie finally gets to Budapest, she is upset to find that the majority of her possessions, including their dog, Captain, have been left at home with Antal.

As time passes, Ettie tries to find ways to be useful to Iza; keeping an eye on her housekeeper, cooking dinner, doing laundry, or making coffee. All of her attempts to make Iza's life easier are unnecessary, however, as Iza is comfortable with her life as it was before Ettie's arrival. She encourages Ettie, who is terrified of crossing the busy streets, to go out and explore the city, but when she finally makes a friend and brings her home for coffee, Iza is horrified to find that she has unwittingly befriended a prostitute. As Ettie's attempts to adjust to life in the city repeatedly fail, she retreats within herself and, when other people try to make her more comfortable, she discovers that they do not really need her, but are acting out of pity or duty, so she rebuts their efforts.

When Vince's headstone is ready to be installed at the cemetery, Ettie makes the trip back to her home town alone. Originally intending to stay with a neighbor, Antal comes to visit and invites her to stay with him. He can see the effect that living with Iza has had on Ettie's well being, and remembers the experience from his own marriage to Iza. After dinner, Antal asks Ettie to wash the dishes and then goes out, leaving her to take a bath by herself. She would not have been trusted to do either of those things alone in Iza's apartment, and experiences a re-awakening in her old home.

Following the spirit of Vince, whom she can sense in the old house, Ettie catches a tram to Balzsamarok, the suburb where they had courted in their youth. Unseen by the nightwatchman, she climbs the stairs into an incomplete house in the new estate and falls to her death from a window, leaving Iza truly alone.

More summaries and resources for teaching or studying Iza's Ballad.