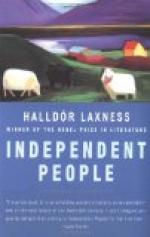 This Study Guide consists of approximately 51 pages of chapter summaries, quotes, character analysis, themes, and more - everything you need to sharpen your knowledge of Independent People.

This detailed literature summary also contains Quotes and a Free Quiz on Independent People by .

Independent People tells the story of Bjartur, a sheep farmer living in Iceland in the late nineteenth and early twentieth centuries.

In Volume 1 Part 1, “Icelandic Pioneer,” Bjartur purchased his own land which he named Summerhouses. The land was said to be haunted by evil spirits named Gunnvor and Kolumkilli. Bjartur married a young woman named Rosa. Bjartur accused Rosa of having sex with Ingolfur Arnarson, the son of the Bailiff at the nearby town of Rauthsmyri, for whom Bjartur and Rosa both used to work. Rosa denied the accusation. Bjartur made Rosa work punishingly long hours on the farm and refused her requests that they buy meat, milk, or their own cow. Bjartur left home to round up sheep with other farmers and left a young sheep tied outside their croft to keep Rosa company. Rosa killed and ate the sheep but did not tell Bjartur. Upon his return Bjartur went looking for the missing sheep, tried to catch a reindeer, and became lost in a snowstorm. When he finally returned home, Rosa was dead and there was a small baby in the bed. Bjartur asked Madam of Myri, the mother of Ingolfur Arnarson, for milk to feed the baby and she complied. Bjartur named the baby Asta Sollilja and decided to raise her as his own daughter despite knowing that he was not her biological father. Bjartur visited a local reverend who arranged for a young woman named Finna and her elderly mother Hallbera to live with Bjartur.

In Part 2, “Free of Debt”, time has moved forward considerably. Bjartur has married Finna and they have three sons together: Helgi, Gvendur, and Nonni, as well as Asta Sollilja. Due to the family’s poverty, the local Women’s Institute gave them a cow. Everyone was emotionally attached to the cow except for Bjartur who resented receiving charity. Bjartur took Asta Sollilja to the nearby town of Fjord and molested her. Bjartur hired a worker named Fritha who criticized him in front of the children and a man from the south of the country stayed on the land at Summerhouses for a vacation. The family struggled financially and Bjartur decided to kill the cow, despite Finna’s pleas to him not to do it.

At the start of Volume 2 Part 1, “Hard Times,” it is revealed that Finna died shortly after Bjartur killed the cow. Helgi began murdering Bjartur’s sheep in secret and blaming it on the demon Kolumkilli. The local community assembled at Summerhouses for an exorcism but Bjartur threw them out and said that he planned to report the deaths of his sheep to the authorities. Helgi disappeared. Bjartur told Asta Sollilja that he was leaving her in charge while he went away to find work. While he was away, an unnamed man arrived and claimed that Bjartur had sent him to be the children’s teacher. During his stay, the teacher raped Asta Sollilja and wrote a mysterious letter he claimed would allow Nonni to visit other countries. Bjartur returned and it was revealed that the teacher was a stranger he had mentioned Asta Sollilja to in passing. When the snow thawed, Bjartur found Helgi’s dead body but did not tell anyone. Nonni received a letter offering him passage to emigrate to America and he left the family. Bjartur discovered that Asta Sollilja was pregnant. He told her that he was not her real father and that she had to leave his house and live with her real family in Rauthsmyri. Asta Sollilja set off in the opposite direction, heading for the town of Fjord.

In Volume 2 Part 2, “Years of Prosperity,” Nonni wrote to Gvendur inviting him to join him in America. Gvendur left the farm to begin his journey but on the way fell in love with a girl and decided not to leave after all: the girl then scorned him for being too cowardly to go to America. Gvendur briefly visited Asta Sollilja and her daughter who were living in poverty. Asta Sollilja told him that her father Ingolfur Arnarson had offered her money but she had refused him. An economic boom brought about by World War One encouraged Bjartur to take out a loan to build a house at Summerhouses, but when the war ended Bjartur was left with debts that he could not repay and Summerhouses was repossessed by the bank. Bjartur travelled to Fjord with Gvendur to make preparations for their departure from Summerhouses. While there, they met some socialist workers planning to fight with the police over a strike. The socialists offered Bjartur some stolen bread and he ate it, destroying his sense of himself as an independent man. Bjartur visited Asta Sollilja and asked her to return to live with him, which she willingly did, and the remaining family members packed their things and left Summerhouses for good.

More summaries and resources for teaching or studying Independent People.