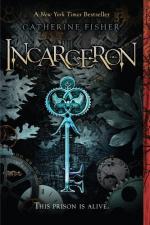 Catherine Fisher
This Study Guide consists of approximately 40 pages of chapter summaries, quotes, character analysis, themes, and more - everything you need to sharpen your knowledge of Incarceron.

Incarceron, by Catherine Fisher, is the story of a living prison and the struggle of those that live both inside and outside the prison. Finn, the main character in the story, struggles to find freedom from the prison that he feels that he lives within. Claudia lives outside the prison but also is struggling to find a way to free herself from the life that she is living and comes into contact with Finn and believes that he is a long lost prince from her world. The story is set in a fictional world, in a future where advanced technology has given those in charge the ability to pick the type of era in which the people live, and focuses on the struggles that the characters face while trying to make their own path and live a life of freedom.

Finn does not have any memory of anything that happened before he was approximately 16 and is even unsure of his age. He lives in a world that is made of metal with one glowing eye that watches your every move, and at times the prison can even punish you. The men that he travels with are a band of thieves that live by a rugged cruel code of ethics, and although Finn is willing to fight, and often kill, his kindness that is seen sets him apart from those he travels with. When Finn finds himself in possession of a crystal key his life begins to change. He uses the key to talk to a woman that claims to be outside the prison, although no one in the prison knows how to get out and some even doubt that there is a way to get out.

Claudia is the daughter of the Warden of Incarceron. She fears her father in many ways but is willing to defy him in order to save herself from an arranged marriage with a prince. Claudia is trying to find Incarceron when she finds the strange crystal key and begins talking with the boy Finn. After some time speng communicating with Finn, Claudia and Finn begin seeing each other more regularly. When Claudia sees Finn and learns that he has no memory of anything from his childhood she immediately believes he was the king's older son from a previous marriage and was sent to Incarceron because the queen wanted her own heir to be the future queen. Claudia encourages Finn to find a way out of Incarceron and believes he is her hope of escape.

Finally, Claudia and Finn learn that the keys are the way to enter and leave Incarceron. Finn escapes Incarceron. Once in Claudia's world Finn is thrust into public view as the long lost prince, although Finn is not entirely sure that he is the prince. Finn realizes quickly that he feels just as trapped in Claudia's world as he had his own.

More summaries and resources for teaching or studying Incarceron.