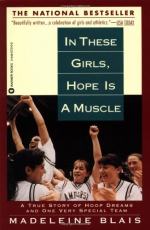 In These Girls, Hope Is a Muscle Summary & Study Guide

In These Girls, Hope Is a Muscle Summary & Study Guide Description

In These Girls, Hope Is a Muscle Summary & Study Guide includes comprehensive information and analysis to help you understand the book. This study guide contains the following sections:

This detailed literature summary also contains Topics for Discussion on In These Girls, Hope Is a Muscle by Madeleine Blais .

In These Girls, Hope Is A Muscle, a nonfiction book by Madeleine Blais, chronicles a year in the lives of a high school basketball team, the Amherst Lady Hurricanes. Beginning at a low point of choking during a regional play-off, the book follows a year of training and changes that led to a resounding win as the team took the state championship.

In order to win, the girls went through a steady stream of small victories throughout the year. These happened on and off the court. On the court, they came into the play-offs almost undefeated. Rigorous training accounted for some of that success. The rest of the victories came from smaller, more personal decisions made by the girls. Teenage years are fraught with anxiety and changing allegiances, as each person is deciding what kind of person they want to be. The two team captains, Jamila Wideman and Jen Pariseau, had been growing apart. One girl, Patri Abad, moved away. Another, Rita Powell, was hounded by a stalker. Kim Warner lost hope and had to be confronted in the middle of the game to get her head back into it. A few of them considered quitting. In each case, these issues were solved by one of the girls reaching out to a team member for support, whether they wanted it or not. The connection they had goes beyond what is usually seen on the court. However, it was these emotional bonds that meshed together into the teamwork that enabled them to win.

The author paints a picture of the area the girls call home, centered around Amherst, Massachusetts. It is a quirky town, nestled between three large universities and beyond that, farmland. The residents are a mixture of intellectuals with little practical knowledge and rural people with worldly experience but little book knowledge. Blais explains these details to describe the background that forged these girls. It is such a unique area that perhaps this is the only kind of place that could create them.

The book shines a spotlight on an underappreciated side of athletics: that of girls sports in high school. While boys' teams have a lot more fans and supporters, girl athletes often have to fight for acceptance. The author purports that, at the time of the Hurricain's story at least, girls basketball was marginalized and seen as inferior. This was also before the time of any professional women's basketball teams, and many of the big colleges did not even have female basketball teams.

The girls did't have a solid future in the sport, since there were few opportunities outside of high school. This put an undue amount of pressure on them to succeed while they could, because there would not be another chance.