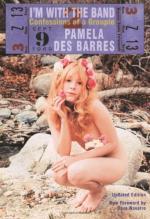 Plot Summary
+Chapters Summary and Analysis
Chapter 1, Let Me Put It In It Feels All Right
Chapter 2, The Time To Hesitate Is Through
Chapter 3, Have you Ever Been Experienced?
Chapter 4, Sweetheart of The Rodeo
Chapter 5, Every Inch Of My Love
Chapter 6, It's a Gas Gas Gas
Chapter 7, Dedicated Follower of Fashion
Chapter 8, I Met Him on a Monday and My Heart Stood Still
Chapter 9, Take My Hand, Take My Whole Life Too
Epilogue, Appendixes, P.S. and VariousUntitled Add-ons
Free Quiz
Characters
Objects/Places
Themes
Style
Quotes
Topics for Discussion
Order our I'm with the Band Study Guide

Pamela Des Barres
This Study Guide consists of approximately 33 pages of chapter summaries, quotes, character analysis, themes, and more - everything you need to sharpen your knowledge of I'm with the Band.

I'm with the Band Summary & Study Guide includes comprehensive information and analysis to help you understand the book. This study guide contains the following sections:

This detailed literature summary also contains Topics for Discussion and a Free Quiz on I'm with the Band by Pamela Des Barres.

I'm With the Band, by Pamela Des Barres, is a tell-all of the author's youthful groupie adventures. Amplifying diary entries with vivid recollections, Miss Des Barres captures freedoms and attitudes as they bloom alongside flower power during the 1960s. A mass awareness has overtaken a generation, and something is in the air. Music and musicians represent social and political change. Few possess Miss Pamela's dedication, but her story portrays American Baby Boomer life as it comes of age and matures. Rock and Roll feeds rebel fantasies and, while her peers protest the war and march for causes, Miss Des Barres actualizes fantasies which, for her, evolve from lust into a quest for true love.

The author starts off with Pamela Miller, as a teen, watching in horror as Elvis gets his hair shaved for his Army stint. Quoted song lyrics elicit a sound-track that links teenagers across America. She swoons over teen idols Paul Anka and Dion. When British accents saturate the Top 40, her senses awaken. Innocent daydreaming takes on carnal awareness. She writes explicit letters and poetry to Paul McCartney. After attending a Beatles concert, she feels compelled sneak into The Beatles' Bel Air hotel to meet Paul who, upon meeting Pam, will forget all others. The unaccomplished mission whets her appetite for more missions.

The new music has Pam wearing new fashions and adopting new attitudes, all of which signify change for a better world. A fellow high school student introduces her to "Captain Beefheart", and she soon becomes a fixture on Sunset Strip. She starts listening to Dylan lyrics and Rolling Stones records and enters a hip circle of friends whose lifestyle personifies a burgeoning counterculture. For Pam, this culture embodies truth-seeking as well as sex appeal. Her Sunset Strip outings have her rubbing body parts with members of Love, The Doors, Traffic, and others who burned cultural brands in the music scene. A close friendship with four other girls who share her musician interest, draws the attention of Frank Zappa into creating an all-girl group known as The GTO's.

The GTOs, or Girls Together Outrageously, develop as an opening act for Zappa and gain marginal fame by association. Write ups in Rolling Stone and other publications give status to the five groupies, and GTO notoriety leads Pamela to meet and pursue Noel Redding of the Jimi Hendrix Experience, Mick Jagger, Jimmy Page of Led Zeppelin, and Keith Moon of The Who, among others. Pam, who now is called "Pamela", works hard to become the woman on the arm of a rock star. However, her trysts and favors more often than not keep her waiting on the sidelines. She endures much anguish as the grapevine carries news of girlfriends or wives in England. She faces the reality of her groupie counterparts at every tour stop her British-accented lovers hook up with in every city. Jimmy Page whispers beautiful possibilities, but never takes her to England as his wife. In between affairs with each artist that comes to town, Pamela attempts to jumpstart an acting career. She feels it in her bones she is meant to be famous. Her SAG card and social connections also lead into romance with Don Johnson and Brandon De Wilde.

Often, Pamela's life is contradictory. In many journal entries, she questions what she is doing with her life. Through her early cavorting, she manages to keep her virginity for quite a long time, while satiating her many long-haired lovers. One moment she is the ultimate mistress to Chris Hillman, Jimmy Page, and Mick Jagger. Simultaneously, she makes eight cents per dance at a dance hall, satisfying fantasies of nerdish, lonely men to save for a trip to England—a trip Jimmy Page or Mick Jagger should cover.

In spite of Miss Pamela's talent with the opposite sex, time is passing her by. She is in her twenties and realizes her acting career is not taking off and she is not becoming as famous as she feels she is meant to be. She is a GTO with a record out, but hand-sews cowboy shirts for her musician boyfriends as well as to make ends meet. She has no career to speak of or fall back on. Perceived as "old" at twenty-four by younger groupies, Miss Pamela's search for true love terminates with Michael Des Barres, whose fame is marginal but whose true affection and dedication brings her great happiness as well as a son.

More summaries and resources for teaching or studying I'm with the Band.

I'm with the Band from BookRags. (c)2022 BookRags, Inc. All rights reserved.