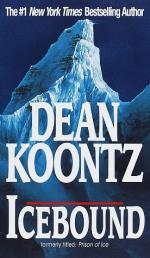 Icebound is an early novel of Dean Koontz originally published under a pseudonym and another title. In this novel Harry Carpenter and his wife, Rita, lead a group of scientists to the polar ice caps where they plan to use explosives to break off a piece of the ice cap and monitor its progress as it moves through the natural ocean currents. The hope is to find a way to safely get these icebergs to countries devastated by drought. However, as the team finishes setting the bombs, a tsunami breaks off a section of the ice cap, leaving Harry and his team afloat on a giant iceberg. The team has just eleven hours to get off the iceberg before the bombs explode. Unfortunately, a huge storm is blocking the way for nearby ships and there is a possible killer among Harry's team members. Icebound is not a typical Dean Koontz novel, but it is filled with the same suspense and heroic characters that keep readers coming back for more.

Harry Carpenter and his team are on the polar ice cap attempting to dislodge a piece of ice and monitor its flow through the natural currents of the ocean in order to find a safe way to transport ice to drought devastated countries. Harry and two members of the team have just completed burying sixty bombs in the ice when a tsunami rocks them off their feet. Harry immediately packs up his team and heads back to camp to check on the condition of his other team members, including his wife. However, the direction of the wind and the setting on the compass warn Harry that the ice has shifted, suggesting that he and his team are now afloat on the ocean. Praying that his wife is on a separate piece of ice and therefore safe, Harry begins searching for camp. Halfway there, a chasm opens in the ice, swallowing Harry's snowmobile and their drill.

Further out on the ice, a team of three men is finishing the preparation of a beacon that will allow the team to monitor the movement of the ice once it separates from the ice cap. When the tsunami hits, the men are thrown off their feet and one man, George Lin, falls over the side of the newly formed iceberg. Brian Dougherty and Roger Breskin rescue George by lowering themselves to his location with ropes. The three men then return to camp to find out what has happened and what the plan is.

At camp, Harry discovers his wife and the eighth member of the team are okay, but their camp is destroyed. The team has no shelter and no source of heat, as well as little food. They find a cave to hide in and radio Gunvald Larsson, the final member of the team who remained at Edgeway Station to monitor the weather. Gunvald promises to radio for help immediately. However, the team realizes their first priority has got to be to find a way to dismantle the bombs. Unfortunately it took the men more than three days to set the bombs, therefore they cannot dismantle them all, especially without their drill. Harry believes that if they can dismantle ten they might be able to survive the blast. Four members of the team, plus Harry, return to the bombs and begin digging them up again.

Harry and his team successfully dig up four bombs, but the drill they are using breaks and they are forced to stop. The team packs up and goes back to the cave. However, upon their arrival they realize that Brian is not with them. They return to the area and Harry finds Brian lying behind a fissure of ice. They take Brian back to the cave and warm him up in one of the snowmobiles. When Brian is able to talk, he tells Rita and Harry that someone hit him over the head and left him for dead, but he does not know who it is.

Harry tells Pete what Brian has said and asks for his help in keeping Brian safe until they can get off the iceberg. Unfortunately, it appears their chances of rescue are growing narrower by the moment as the two closest ships are forced to turn back because of the approaching storm. Fortunately, there is a Russian submarine in the area that has gotten permission from their government to help.

The captain has his radio man contact Harry and they discuss the possibility of the team diving down to the submarine. Harry agrees that this may be their only chance. The submarine dives under the iceberg once more and moves beneath the hole in the iceberg. They then send up their aerial antenna with cases of special diving equipment attached. The Edgeway team dones the suits and begins the treacherous swim more than seven hundred feet to the submarine. During the dive, Roger Breskin pulls Harry's mask from his face and attacks Brian. The other members of the team see what is happening and they stop Roger by removing his air hose. Harry's team makes it to the submarine minus Roger just seconds before the bombs explode.