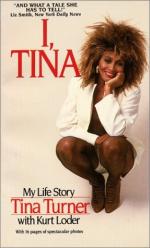 I, Tina Topics for Discussion

What kind of relationship did Tina have with her mother? What potential impact did it have on Tina's future relationships and her own self-worth?

What was Phil Spector's "wall of music?"

Why did Tina's first solo record "Mountain High" flop in the United States and become a smash hit in England? How did Tina feel about this recording?

The introduction to what religion helps Tina build enough self-esteem to leave Ike? What rite does Tina practice that originates from this religion?

After having difficulty securing a state-side gig, what US venue did Tina play that launched her solo career in full force? What contacts did she make during engagements at this venue?

What part did British rock stars play in Tina Turner's career? What are the names of some of these luminaries?

In what two major movies did Tina have roles? Who were some...