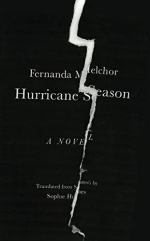 Fernanda Melchor
This Study Guide consists of approximately 55 pages of chapter summaries, quotes, character analysis, themes, and more - everything you need to sharpen your knowledge of Hurricane Season.

The novel takes place in present day Mexico, in a small and rural town called La Matosa. The third person narrator observes the town as a dead body is discovered in the local river. The body is identified as a woman known only as the Witch, and a murder investigation ensues.

The narrator tells the Witch’s origin story, beginning with her mother, who is suspected to have killed her husband for his wealth. No one knows who the Witch’s father is, and some people speculate she is the child of the devil. In 1978, there is a landslide that kills the Witch’s mother; from then on, the Witch forever wears a black veil. The Witch not only becomes known for her supposed curses and spells, but also for the fact that she often pays men for sexual favors.

The novel begins following a young girl named Yesenia, who often butts heads with her cousin, Luismi. As the eldest in her family, Yesenia is responsible for taking care of her younger siblings and cousins. When Luismi misbehaves, it is Yesenia who is beaten by their grandmother, Doña Tina.

The novel then follows Munra, a man with a leg deformity, who lives with his drug-addicted stepson, Luismi. He also lives with his wife, Chabela, but she has been missing for days. Because Chabela is a sex worker, Munra assumes she is out partying. Luismi’s girlfriend, Norma, also lives at the house. One night when what Munra thought was just Norma’s period leads to too much blood loss, he has to drive Luismi and Norma to the hospital. When the hospital finds out Norma is only 13, Luismi is banned from seeing her, as he is in his twenties.

One morning Munra finds Luismi covered in mud, and sees he has dug something up. Thinking the object has something to do with witchcraft, Munra tells him to burn it. Later, Luismi asks Munra to drive him and his friend Brando somewhere. He soon realizes the boys are making him drive to the Witch’s house. Munra does not like the Witch; ever since he found out she is a transgender woman, he feels uncomfortable around her.

The boys enter the house as Munra waits in the car. When they come back out with a body, they make him drive out to a field. Later, when Munra is questioned by the police, he swears he did not know that Brando and Luismi were planning to kill the Witch.

The novel then follows Norma, as she is found crying in a park by Luismi. Norma has just run away from home, and before Luismi came along, she was planning on killing herself. Luismi invites her to stay with him, and before long, the two become a couple. Norma is pregnant, but the baby is not Luismi’s; the baby instead belongs to a man named Pepe.

The novel flashes back to the day Pepe became Norma’s stepfather. Pepe begins to molest Norma at the young age of 12. After she menstruates for the first time, Pepe has sex with her. Norma does not tell her mother about any of this, as she fears her mother will be angry with her. Eventually, her period stops, and Norma realizes she is pregnant.

Flashing back to the present, Chabela asks Norma if she wants to terminate the pregnancy, and she says yes. Norma drinks a potion made by the Witch. Later, she digs a hole, pushes something out of her body, and buries it with the jar. The next thing she remembers is waking up in the hospital.

As Brando attends some of the Witch’s parties, he feels jealous when he sees Luismi and the Witch kiss one another. Brando slowly realizes he has romantic feelings for Luismi. One night, Brando and Luismi engage sexually with one another, but then never speak of the incident. Consumed with the fear that Luismi will tell their friends that he is gay, he makes a plan to murder Luismi.

Brando’s plans to kill the Witch, blame it on Munra, steal her money, run away with Luismi, and then kill Luismi. Eventually, Brando convinces Luismi to rob the Witch with him. However, the plan goes poorly, as they find no money in the house. They dump the Witch’s body in the river, but it is not long before Brando and Luismi are arrested.

After the Witch’s death, people raid her house in search of her money. Just like Brando, they find nothing. The only thing found in the house is the corpse of the Witch’s mother. As the crime rate in the town increases, people fear the Witch cursed the town in her death. Meanwhile, the weather grows hotter, and everyone knows hurricane season is on the rise.

The novel ends as a man named the Grandfather buries bodies of the recently deceased. As he does so, he speaks to the bodies in hopes that he can guide their souls to the afterlife. Suddenly, the first rain of the season falls.

More summaries and resources for teaching or studying Hurricane Season.