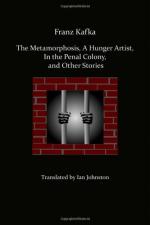 Though not widely recognized during his lifetime, Kafka was well-respected within his small literary, intellectual circle in Prague, the members of whom were aware of his considerable talents. Kafka published his first prose pieces at the age of 25 in Hyperion, a journal edited by his close friend Max Brod. Throughout his brief life, he continued to publish in journals, as well as several small volumes of his stories.

Kafka was one of those classic literary figures who lived and wrote in relative obscurity, only to be hailed as one of the foremost writers of his century years after his death. Shortly before his death, Kafka requested that his female companion, Dora Diamant, burn all of his unpublished writing, echoing a similar request to his close friend Max Brod. Brod, however, was wise enough to see the potential importance of Kafka's work to...