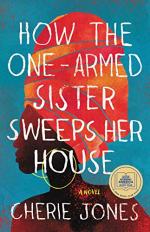 How the One-Armed Sister Sweeps Her House Summary & Study Guide

Cherie Jones
This Study Guide consists of approximately 37 pages of chapter summaries, quotes, character analysis, themes, and more - everything you need to sharpen your knowledge of How the One-Armed Sister Sweeps Her House.

How the One-Armed Sister Sweeps Her House Summary & Study Guide includes comprehensive information and analysis to help you understand the book. This study guide contains the following sections:

This detailed literature summary also contains Quotes and a Free Quiz on How the One-Armed Sister Sweeps Her House by Cherie Jones.

The following version of this book was used to create the guide: Jones, Cherie. How the One-Armed Sister Sweeps Her House. Harper Collins, 2021.

In the prologue, Lala’s grandmother, Wilma, tells her the story of the one-armed sister. There were once twin sisters. One was smart and one was stupid. One day, the stupid sister decided to explore the tunnels. A monster started to drag her to the other side. Others tried their hardest to get the sister away from the monster but in the end, the monster ripped her arm off. The stupid sister was left with a stump for an arm as a reminder of her failure to listen to the warnings about the tunnel.

The novel begins with a heavily pregnant Lala searching for her husband, Adan, on the beach. She is bleeding. Lala stops at the first house she sees and presses the buzzer for help. She hears a gun go off. Adan comes out, wearing a mask. He takes Lala to the hospital, where she gives birth to a baby girl. It is a difficult birth and the nurses are unsure whether Baby has long to live.

It turns out that that Adan shot a man the night of Baby’s birth: Peter Whalen. Adan was robbing him when he heard the buzzer and panicked. Peter’s wife, Mira, mourns her husband’s death. She loved him dearly. Mira’s mother, Martha, tries to convince her to come home to England. Mira refuses and becomes depressed.

Adan spends the next few weeks hiding out in the tunnels his friend Tone showed him when they were young. Whenever he is home, he finds reasons to beat Lala. One day, Tone shows up with a woman named Jacinthe. Adan flirts with Jacinthe and shows off Baby to her. Afterwards, Lala and Adan grapple over Baby and accidentally drop her. The next morning, Baby is dead. Adan accuses Lala of killing Baby.

Meanwhile, Mira grieves Peter’s death. She reflects on how he fell in love with her instantly and left his first wife for her. She loves her stepchildren, Sam and Beth. One night, Mira imagines that she hears a robber. It turns out to be a false alarm. Baby is found on the beach beside a canoe. It appears she was kidnapped and killed. In reality, Tone and Lala brought her there. They do not want Lala to be accused of murdering Baby.

Sergeant Beckles is assigned to Baby’s case. He questions Wilma and Lala endlessly. Lala feels guilty for Baby’s death. She has no way to pay for Baby’s funeral since Adan stole all the money she had saved from her job braiding hair on the beach. When she sees Adan, she demands her money back. He beats her. Adan claims to have a plan to get some money.

Tone goes to visit Lala. He wants to offer his condolences. He is worried someone will see him, as he is Lala’s secret lover. He spies Adan inside the house and retreats, vowing to visit Lala when she is alone. Adan beats Lala badly. She runs out onto the beach, where Mira and Mira’s friend Grayson try to help her. Lala panics and runs back home. Afterwards, Tone comes over and comforts Lala.

Mira continues to mourn Peter. After she had three miscarriages, their relationship turned sour. She is sorry that she had an affair and that she let these problems get between them. Peter’s first wife comes to take the children away to England. Mira says goodbye to them and wonders whether she is making a mistake.

Baby’s funeral is held. Lala borrows money from Wilma to pay for the funeral, infuriating Adan. Five months later, Lala is pregnant again. She and Adan hardly speak anymore. One day, Adan tries to strangle Lala. She has finally had enough and runs out onto the beach. Mira and Grayson spot her once more. Grayson invites her into his home. They call the police. Lala meets up with Tone, who gives her enough money for a plane ticket to America. Lala is to stay with Grayson for a few days before flying to New York City, where Tone has a cousin. He intends to meet her there when he can.

Tone meets up with Adan to help Adan with a drug deal. Tone realizes that they are smuggling cocaine, not marijuana. When Tone protests, Adan insults his manhood. This starts a physical altercation between them. Tone manages to run away. Mira goes on a walk. Adan spots her and shoots her, since she recognizes him from the night of the robbery. Adan runs after Tone, into the tunnels. Tone grabs a stalagmite and kills Adan.

In the epilogue, Tone wakes up in the hospital. Sergeant Beckers tells him he is under arrest for Baby’s kidnapping and murder. Tone comforts himself with the knowledge that Adan can never hurt her again and that she will soon be off to America.

More summaries and resources for teaching or studying How the One-Armed Sister Sweeps Her House.

How the One-Armed Sister Sweeps Her House from BookRags. (c)2022 BookRags, Inc. All rights reserved.