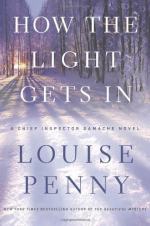 How the Light Gets In Symbols & Objects

Louise Penny
This Study Guide consists of approximately 56 pages of chapter summaries, quotes, character analysis, themes, and more - everything you need to sharpen your knowledge of How the Light Gets In.

Audrey Villeneuve has panic attacks while driving through this tunnel on her was to and from work. It is later learned that she had discovered that no upgrades and repairs were being done on the roadways and infrastructure, causing her fear of the tunnel. At first, Gamache believes that the plan is to destroy this tunnel.

It is in this dress that Audrey Villeneuve has placed her hope in life. Gamache later finds a thumb drive with the information about the unrepaired substructure of the town sewed into the hem of the dress.

Gamache has a scar on his forehead that apparently came from the failed raid at a factory. The scar is mentioned often as a way to remind the reader of the tragedy that separated Gamache and Jean-Guy.

More summaries and resources for teaching or studying How the Light Gets In.

How the Light Gets In from BookRags. (c)2020 BookRags, Inc. All rights reserved.