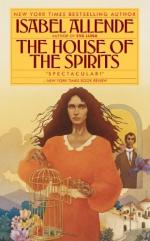 Isabel Allende
This Study Guide consists of approximately 77 pages of chapter summaries, quotes, character analysis, themes, and more - everything you need to sharpen your knowledge of The House of the Spirits.

Daughter of Fortune (1999), also by Isabel Allende, is the story of a young woman's journey to California during the gold rush of the ninetheenth century.

Paula (1995), by Isabel Allende, is a memoir that was begun when Allende's daughter became ill.

Based on a True Story: Latin American History at the Movies (1999), edited by Donald Stevens, presents an overview of how movies have depicted the history of Latin America. This book covers history from the 1500s to the present as depicted in film.

Speaking of the Short Story: Interviews with Contemporary Writers (1997), edited by Farhat Iftekharuddin...

More summaries and resources for teaching or studying The House of the Spirits.

The House of the Spirits from Gale. ©2005-2006 Thomson Gale, a part of the Thomson Corporation. All rights reserved.