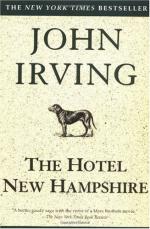 This detailed literature summary also contains Literary Precedents and a Free Quiz on The Hotel New Hampshire by John Irving.

As the story opens, John Berry and his siblings are listening yet again to the story of a bear called "State O' Maine," the bear's owner who is a Jewish man known simply as "Freud," and how the bear came to be part of the lives of their parents on the summer they fell in love. As the story unfolds, the children object to specific statements, insisting that the story be told correctly. John's siblings include his older brother and sister, Frank and Franny, and younger siblings Lilly and Egg. The story is so familiar that all five of the children will sit still and listen, often adding pieces of information.

John's parents, Win and Mary, grew up in Dairy, New Hampshire. Win is the son of Coach Bob, coach of the Dairy school's football team. The two marry immediately after their summer working at a resort hotel where, by a series of coincidences, John has become the owner of a performing bear called State O' Maine who later is called Earl. Win uses the bear as a means of earning a living until he has enough money to attend Harvard. Mary remains at home, having the first three children rapidly. Win is then drafted and the last two children aren't born until after his return.

When the Thompson Female Seminary closes, Win buys the abandoned building and turns it into the Hotel New Hampshire. John and his siblings eventually attend the Dairy school, though their lives are anything but smooth there. When Franny is raped, John feels the effects as well. It takes the two - who are very close - many years to recover. Then Win hears from Freud who wants the family to come to Vienna where he has a hotel. They agree but the plane on which Mother and Egg are traveling crashes and both are killed. At the hotel there is a woman named Susie dressed as a bear who serves as security. The family later uncovers a terrorist plot and is held captive but the plan is foiled when Freud manages to set off the bomb before it arrives at its destination. Freud is killed and Win blinded but the family has become overnight heroes, a fact that helps John in his negotiations for a book written by Lilly.

Lilly has never grown as she should and it's been suggested that she has a form of dwarfism. Lilly has taken on writing as a euphemism for "growing" and her first book is a great success but the next is less so and Lilly, citing her inability to grow, commits suicide. Meanwhile, Win has convinced the family to purchase yet another hotel, the abandoned resort where he met Mary. They agree and live there, convincing Win that it's a successful operation though almost never accepting a guest. Susie, the "bear" from Vienna, returns to the states as well and is on hand when Franny confronts her rapist. Susie and John marry as do Franny and a young man from the Dairy school, a football player named Junior Jones.