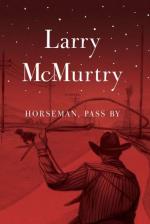 Larry McMurtry
This Study Guide consists of approximately 28 pages of chapter summaries, quotes, character analysis, themes, and more - everything you need to sharpen your knowledge of Horseman, Pass By.

This detailed literature summary also contains Topics for Discussion and a Free Quiz on Horseman, Pass By by Larry McMurtry.

Lonnie is a young man growing up on his grandfather's ranch in Texas, in the 1950s. Lonnie lives with his Granddad and Grandma and his uncle Hud, who is Grandma's son from a previous marriage. Their hired hands include Lonzo, Jesse, who has only recently been hired, and Halmea, the African-American cook.

One day, one of Granddad's cattle drops dead for no apparent reason. They call in the state veterinarian to consult, and he fears that they have an outbreak of hoof-and-mouth disease, an extremely contagious cattle disease. The state vet brings in lots of men to test all of Granddad's cattle, so the entire herd has to be rounded up and quarantined. After a tense week, it turns out that the cows have the worst strain of the disease, and that they will all have to be shot and burned. Granddad at first resists, insisting that he will not shoot his own healthy cattle. Finally he relents, and the men go through a hellish day of blood and death, destroying every cow on the ranch. Granddad seems devastated.

In the evenings, Lonnie is filled with restlessness, and he sometimes drives into Thalia, the nearest town, to goof off with his friends, and see if they can scare up some trouble. Mostly they just get drunk, and Lonnie longs for the day that he can leave this rural area and see the world. Some evenings Lonnie pesters Halmea, trying to get a chance to see her in her nightgown, since he has a crush on her. One night, Lonnie hears a commotion in Halmea's cabin and discovers that his uncle Hud is attacking Halmea. Hud has already beat Jesse unconscious, and he beats up Lonnie, then rapes Halmea. The next morning, Halmea quits.

Since the rodeo is in town, Lonnie goes to see the shows, but his friend Hermy gets trampled by a bull and is hospitalized. On the way home, Lonnie and Hud get into an accident, striking Granddad, who is crawling, senile, on the road. Hud "puts Granddad out of his misery" with a shotgun. Afterward, Lonnie is not sure if Hud just wanted to take Granddad's land from him. Lonnie decides that there is no reason to stay there anymore and goes off to hitchhike around the world.

More summaries and resources for teaching or studying Horseman, Pass By.