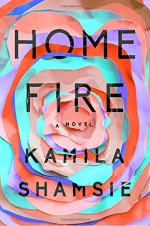 The following version of this book was used to create this study guide: Shamsie, Kamila. Home Fire. Riverhead Books, 2017.

The novel opens on Isma Pasha, a 28-year-old Muslim woman, British-born but ethnically Pakistani, as she is detained in Heathrow Airport. Isma is moving to Massachusetts to study sociology at Amherst. Isma was responsible for raising her 19-year-old twin siblings, Aneeka and Parvaiz, after their mother died when the twins were children. Their father, Adil Pasha, was a member of a radical Muslim terrorist group and died while being taken to Guantanamo Bay. Aneeka is a law student at the London School of Economics and Parvaiz has recently moved to Raqqa, Syria to join ISIS. Isma feels saddened and betrayed by Parvaiz's actions.

Once she is safely ensconced in Massachusetts, Isma meets Eamonn Lone, the 24-year-old son of Britain's home secretary, Karamat Lone. The two strike up a friendship but quickly quarrel as Isma disapproves of Karamat Lone's political positions. Karamat Lone is a Muslim, but he has distanced himself from that community and even made derogatory remarks about other Muslims. Isma opens up to Eamonn about what happened to her father and tells him that Karamat Lone actually said that her family was better off without him after his death. While in Isma's apartment, Eamonn sees a picture of Aneeka.

Back in London, Eamonn makes an excuse to visit Aneeka and she goes home with him right after they meet. They begin a whirlwind romance that is interrupted when Karamat Lone makes a speech to a group of Muslim students in which he instructs them to assimilate into mainstream British culture rather than adhering to the traditional customs of their religion. Aneeka insists that Karamat Lone is preaching conformity and denigrating Muslim beliefs. She tells Eamonn about Parvaiz, and claims that he wants to come home from Raqqa. Eamonn assumes she has been using him, and that she only wants him to influence his father to help Parvaiz, but she promises she loves him. Eamonn proposes to Aneeka, and then goes to his father. Karamat is furious and says that he will not help the Pashas and that Eamonn is never to see Aneeka again. He has Eamonn physically restrained by security guards so he cannot return to her.

The novel flashes back to the events just prior to Parvaiz joining ISIS. He was recruited by a man named Farooq who claimed to have known Parvaiz's father, Adil Pasha. Farooq convinces Parvaiz that Adil Pasha was a noble fighter and that it is his duty to continue his legacy. Parvaiz's lack of a father figure makes him very susceptible to these messages. However, when they arrive in Raqqa, Farooq abandons Parvaiz, who is shocked at the wanton brutality of the ISIS fighters in his midst. He flees to Istanbul where he buys a phone and calls Aneeka, begging for her help to get home. Aneeka tells him she is working on it, and she is coming for him so they can go to the British Consulate together. When Parvaiz receives a threatening text message from Farooq, he decides to go to the Consulate without Aneeka (who has been detained by Karamat Lone's security forces while trying to leave the country). He is steps away from the Consulate when he is killed.

Aneeka grieves amid a firestorm of media coverage in Britain about Parvaiz. Most view him as a traitor to his country for joining ISIS, and Karamat Lone has revoked his British citizenship so that the body cannot return to the country. It is sent to Pakistan instead. Aneeka becomes determined to get Parvaiz home so she can bury him. She flies to Karachi and goes to the British Embassy to await the body.

Karamat Lone believes that Aneeka was using Eamonn, and his decision to revoke Parvaiz's citizenship was part of a personal vendetta against the Pashas. Eamonn calls and asks him to reconsider but he refuses. While watching the news, Karamat sees a report depicting Aneeka on the lawn of the British Embassy as Parvaiz's body is delivered there. She stays with the body on the lawn for days in protest and Pakistani citizens take up her cause and join her. Isma visits Karamat Lone and asks him to reconsider his position, and then for permission to go to Karachi to join her sister. She tells him that he underestimates Eamonn's intelligence and integrity. Her comments cause Karamat to realize that his son has likely gone to Karachi himself to join Aneeka. Karamat's wife Terry chastises him for making an enemy of a grieving young woman and for abandoning his son. Just as her words are beginning to get through to him, Karamat's bodyguards rush in and escort the Lones into their basement safe room because of a threat against Karamat's life. When they emerge, tragedy has struck. The threat was not against Karamat at all, but against Eamonn. Karamat watches the events unfold on television as Eamonn arrives on the embassy lawn, where he is embraced by two men who attach a bomb on a belt to his waist and run away. As Eamonn struggles to remove the bomb, Aneeka runs to him, and the bomb explodes. The lovers die in each others' arms.