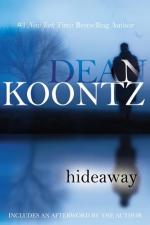 Dean Koontz
This Study Guide consists of approximately 37 pages of chapter summaries, quotes, character analysis, themes, and more - everything you need to sharpen your knowledge of Hideaway.

This detailed literature summary also contains Topics for Discussion and a Free Quiz on Hideaway by Dean Koontz.

Hatch Harrison and his wife, Lindsay, are returning from a weekend at Big Bear resort in California when they encounter a semi-truck jackknifed on an icy road. Unable to stop, Hatch slides and the car lands in a river where Hatch is knocked unconscious. The couple is struggling to get past the grief of losing their son, Jimmy, to cancer, and Lindsay finds herself about to drown. She considers that it would be easy to move from this world, but knows that if she lets go of Hatch, he'll die and isn't willing to make that decision for him. They are taken to Orange County General Hospital where Dr. Jonas Nyebern has a resuscitation unit. Hatch, having been dead at least eighty-one minutes, is still a candidate and is successfully revived with no apparent side effects. He and Lindsay begin to heal after this close call and agree to adopt a girl named Regina.

Dr. Nyebern had successfully resuscitated others, including his son, Jeremy, who had killed his mother and sister before attempting suicide. Now living again but declaring that he'd been to Hell and using the name Vassago - a demon - Jeremy feels he must provide an acceptable offering of dead bodies in order to regain his place in Hell.

There's never an explanation for why, but soon a connection between Jeremy and Hatch is evident and the two see things through the eyes of the other. When Hatch sees what Jeremy sees, it's as if he himself is performing the deed. He watches, as it seems his hand pulls the trigger on a gun and kills a young woman in his car. Then the scene melts away and Hatch is again in his own kitchen. The next morning, he hears on the news that the young woman was killed, just as he'd "seen" in own mind. As he and Lindsay worry that Hatch might have developed some brain damage due to the resuscitation, Hatch continues to "dream" of Jeremy's life. Meanwhile, Jeremy occasionally sees Lindsay, as she would appear through Hatch's eyes. He has heard himself say the name "Lindsay," though it takes him some time to put together all the clues to find her.

It's through this connection that Hatch learns of Jeremy's evil and that Jeremy becomes fixated first on Lindsay and then on Regina. Jeremy eventually learns the address of the Harrisons and takes Regina hostage. Hatch, seeing what Jeremy sees, figures out the location of his "hideaway" and follows. Though Jeremy almost gets the upper hand, Hatch kills the boy, freeing Hatch and Lindsay to live with their newly adopted daughter, Regina, without the killer stalking them or haunting Hatch's dreams.

More summaries and resources for teaching or studying Hideaway.