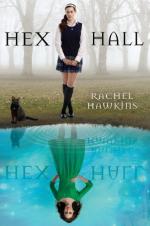 Hex Hall is the first in a series of novels by author Rachel Hawkins. It follows 16-year-old Sophie Mercer, who is struggling to gain control of her powers as a witch, as she navigates a new school where she finds herself among others with supernatural powers. In addition to the usual teen issues of boys, classes and petty jealousies, Sophie must also deal with a series of mysterious attacks on fellow students and a great-grandmother who has returned from the dead.

The book opens with Sophie, a 16-year-old witch, trying to help a girl who is crying because she has no date to the prom. Sophie does her best to cast a spell that will cause a desirable boy to fall for her friend, but things go awry and Sophie is exposed as a witch. This is not the first time her powers -- and her lack of control over them -- have gotten her into trouble, so the Council, the body that governs Prodigium like herself, sentences her to Hecate Hall, a reform school for wayward supernatural beings, until she turns 18.

When she arrives at Hecate, which students have nicknamed Hex Hall, she immediately runs into trouble. Elodie, Anna and Chaston, a trio of black witches, are unhappy when she refuses to join their coven so they become set on making her life miserable. She develops a crush on the handsome, charming Archer Cross, but he has already been claimed by Elodie, and her roommate is Jenna, the school's only vampire and an unwelcome presence at Hecate. The teachers also seem to have it in for her, especially the PE teacher, whom students have nicknamed the Vandy.

Things go from bad to worse when Sophie learns that her father, a warlock she has never met, is actually head of the Council, therefore the one responsible for sentencing all the students to Hecate. When she gets into trouble in class, the Vandy sentences her and Archer to organize various magic items in a dank cellar, but in time the two become friendly and Sophie begins to fall for him despite her efforts not to do so.

The situation takes a turn when Chaston is found nearly dead from blood loss, apparently the result of two small puncture marks that resemble a vampire bite. This event is eerily like the death of another student, Holly, the previous year and Jenna is the prime suspect, although Sophie cannot believe she is capable of such an act. Sophie's life gets more complicated when the ghost of a young girl turns out to be her own great-grandmother, Alice, who has returned from the grave and wants to help Sophie with her magic.

Despite another attack on a student, things are looking up for Sophie after Alice's arrival and even Archer seems to be turning toward her. As they begin to make out in the cellar one night, Sophie unbuttons his shirt, but when she touches his chest, the tattoo of an eye appears. It is the symbol of a powerful group that is set on destroying the Prodigium and Sophie realizes that Archer is a member, but he escapes through a window and disappears. Shortly afterward, Sophie also learns that Alice is actually an evil demon who kills Elodie and is narrowly brought down by Sophie with the help of a shard of demon glass. As the book ends, Sophie tells her mother that she wants to go to London, headquarters of the Council, and have her powers removed.