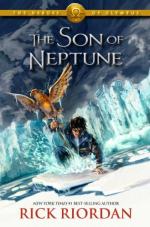 Rick Riordan
This Study Guide consists of approximately 49 pages of chapter summaries, quotes, character analysis, themes, and more - everything you need to sharpen your knowledge of The Son of Neptune.

The Son of Neptune Summary & Study Guide includes comprehensive information and analysis to help you understand the book. This study guide contains the following sections:

This detailed literature summary also contains Topics for Discussion and a Free Quiz on The Son of Neptune by Rick Riordan.

Percy Jackson is a Greek demigod who has lost his memory and wandered into a Roman demigod training camp. His father is Neptune, the Roman sea god. Also known as Poseidon, the Greek sea god. Percy has been in the wilderness for some time under the protection of Luna, the goddess protector of Rome. However, he has been led to Camp Jupiter by the goddess Juno who has a plan in mind for Percy. Unfortunately, he won't find out what that plan is until after he has once again proven he is a hero.

Percy can't remember his past and isn't certain what his future will be. When he arrives at Camp Jupiter, he is assisted by two new friends who take him under their wing. Frank and Hazel are outcasts at Camp Jupiter. They know what it is like to be an outsider and both consider it their duty to help Percy adjust. Each also has their own demons to fight and past to overcome. Before any of them have a chance to gain their footing, they are selected to go on a quest to rescue Death from the giant Alcyoneus who is hiding deep in Alaska. Uncertain of their skills and sure that they will not survive the trio, they embark on the test of their lives.

The goddess Gaea has a plan to destroy the gods and the world along with them. She has created seven children, all of whom are giants. Each of these giants is matched to fight a god who is an enemy. Each giant has the skills to oppose one god and they can only be defeated if the gods and the demigods join forces. This is not an easy task. Percy and his friends manage to defeat the Alaskan giant and save Camp Jupiter from destruction. During their journey, Hazel and Frank become true heroes who know how to use their powers and have self-confidence. Percy regains his memory and helps them save the day.

More summaries and resources for teaching or studying The Son of Neptune.

The Son of Neptune from BookRags. (c)2021 BookRags, Inc. All rights reserved.