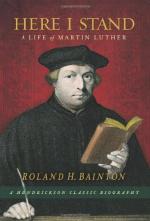 Plot Summary
+Chapters Summary and Analysis
The Vow
The Cloister
The Gospel
The Onslaught
The Son of Iniquity
The Saxon Hus
The German Hercules
The Wild Boar in the Vineyard
The Appeal to Caesar
Here I Stand
My Patmos
The Return of the Exile
No Other Foundation
Rebuilding the Walls
The Middle Way
Behemoth, Leviathan, and the Great Waters
The School for Character
The Church Territorial
The Church Tutorial
The Church Ministerial
The Struggle for Faith
The Measure of the Man
Free Quiz
Characters
Objects/Places
Themes
Style
Quotes
Topics for Discussion
Order our Here I Stand: a Life of Martin Luther Study Guide

Roland Bainton
This Study Guide consists of approximately 31 pages of chapter summaries, quotes, character analysis, themes, and more - everything you need to sharpen your knowledge of Here I Stand.

Here I Stand: a Life of Martin Luther Summary & Study Guide includes comprehensive information and analysis to help you understand the book. This study guide contains the following sections:

This detailed literature summary also contains Topics for Discussion and a Free Quiz on Here I Stand: a Life of Martin Luther by Roland Bainton.

This book is about the life of Martin Luther and his continuing impact on the world. Luther is raised in a conservative and disciplined home and goes on to become a monk without his father's initial blessing. Luther does everything a monk should do. He is committed to prayer, fasting, vigils, preaching, and teaching to the point of exhaustion. He continues his education and goes on to become a leader in the Catholic Church. Martin Luther studies the Bible intently. He struggles with how to earn his salvation. He never feels he can do enough to pay for the sins he commits. Over time he changes his belief that man can earn salvation to the belief that Christ pays the price for salvation for all who believe.

Luther understands good works are not a requirement for heaven, but an act of obedience to God. Luther starts to change the way he views many spiritual matters. He begins to feel convicted that some of the practices of the Catholic Church are not right. He disagrees with the practice of the Pope in granting indulgences. He believes in the priesthood of all believers. He does not think that clergy alone can intrepret Scripture or pray directly to God. Luther thinks that any believer can interpret Scripture and pray to God. Luther does not believe in the necessity of sacraments such as confirmation, penance, and extreme unction. Luther thinks the laity should be able to partake of the wine in Communion.

Luther's challenge of the Pope's authority as completely divinely inspired and without error, sends shock waves through the Catholic Church. Luther's opposition comes out in force, urging him to recant his position. Luther stands by his ninety-five theses and believes he is teaching what the Bible instructs. Luther faces trials, the need to hide, and the fear of martyrdom. Luther does go back into the public eye and actually starts a family of his own. Luther never gives up on writing books, even when he knows some people are burning them. Luther spends his time preaching, speaking, teaching, reading, writing, studying, counseling, and serving God's people. It is not uncommon for Luther to preach every day of the week, even three times on Sunday. The author argues that Luther's greatest influence on the people is in how he views the home and the responsibilities of husband and wife. One of Luther's greatest accomplishments is that of translating the entire Bible into the German language, which affects the translation of the English version. Luther starts the Reformation and is responsible for the formation of the Protestant Church. He has a large following in the United States. Luther inspires boldness in other Protestants to form different denominations. Without the influence of Martin Luther, it is hard to imagine how Christianity might be practiced today.

More summaries and resources for teaching or studying Here I Stand: a Life of Martin Luther.

Here I Stand: a Life of Martin Luther from BookRags. (c)2022 BookRags, Inc. All rights reserved.