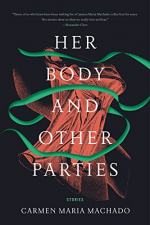 Related Topics
In the Dream House

Her Body and Other Parties Summary & Study Guide

Machado, Carmen Maria
This Study Guide consists of approximately 56 pages of chapter summaries, quotes, character analysis, themes, and more - everything you need to sharpen your knowledge of Her Body and Other Parties.

Her Body and Other Parties Summary & Study Guide Description

Her Body and Other Parties Summary & Study Guide includes comprehensive information and analysis to help you understand the book. This study guide contains the following sections:

This detailed literature summary also contains Quotes and a Free Quiz on Her Body and Other Parties by Machado, Carmen Maria.

The following version of this book was used to create the guide: Maria Machado, Carmen. Her Body and Other Parties. Graywolf Press, 2017.

Machado’s collection features eight stories—the first of which, “The Husband Stitch,” is an entryway to many of the themes found throughout the collection. In this story, the readers follow the first unnamed female first-person narrator through a time span of about fifteen years—the reader watches her meet first her boyfriend, then follows her through marriage, childbirth, childrearing, and into the narrator’s middle-thirties. All throughout the piece, the narrator is focused on futures, taking care of her son, desire and the sexual satisfaction of herself and her husband, and raising someone a son who is kind and loving.

In the second story, “Inventory,” Machado introduces a new format to the book: listing. In this story, there are twenty sections that Machado’s second unnamed female narrator lists to detail her notable romantic and sexual encounters. While the story begins enabling the reader to know and come-of-age with the narrator’s sexuality, it quickly shifts pace as a dystopian landscape is established through the presence of an unnamed epidemic that is killing people based on physical proximity.

After that, the third story “Mothers,” continues with a horrifying theme; however, instead of offering us a hellacious landscape, this time Machado crafts the experience of living in the distressing psychological realm of an individual within an abusive relationship suddenly being cast a baby. Not only is the narrator ill-equipped to handle a child, but the romantic partner who gives her the child does not offer any support or guidance for the narrator. This story follows the narrator as she flashes back and fantasizes forward through the life that she is in.

With two variations of gruesomeness in the readers’ head, “Especially Heinous,” is the only story in this collection which does not feature an unnamed first-person female narrator. What is remarkable about this story is that it is a complete rewriting of the episode descriptions of all 272 episodes in the first twelve seasons of Law & Order: SVU. This story follows a similar ruleset of the SVU world—constant violent, sexual crime—with a much more critical eye attempting to highlight the ease with which some crimes are cast off and the ways in which even police forces maintain a degree of bias in regard to taking care of their citizens.

Coming off three stories with varying degrees of trauma at their core, “Real Women Have Bodies,” demonstrates another dystopian landscape following a narrator and her romance with a girl, Petra, in a world where young women have their bodies fade for no understandable reason and from no recognizable cause. What makes this story particular is that, despite the surreal landscape that the characters are cast in, this story also highlights what might be the healthiest romantic relationship of the collection.

“Eight Bites,” is the only short story in the collection with no men in it. Despite that, it is possibly one of the most psychologically disturbing stories in the collection. It follows a mother-narrator who decides to get an appetite-limited surgery after witnessing the transformation it enables in her three sisters. This story is concerned with understanding the sacrifices one might make to have the comfortability and confidence in their body that they desire.

In “The Resident,” Machado follows a narrator who resembles herself as she goes off to an artist residency in an old campground at the top of a mountain that she used to go to with her girl scout troop as a teenager. This story observes the narrator through her psychological turmoil of being back in this seemingly haunted campground. The piece highlights the relationship between artists and women who are thrust into the same atmosphere of romance, artistry, and ambition.

The final story of the collection, “Difficult at Parties,” is one of the most confrontational stories toward trauma: the story begins with the narrator’s clearance from a hospital where she is described as having been victim to some degree of violent sexual assault. The story then describes her aftermath and recovery: watching porn to try and reduce her relation between sex and trauma, going to a house party, and hearing echoes of sexual assaults. As a final story, this piece ties together many of the concerns that this collection faces: how to address trauma, what does it mean to recover, and how does one regain their body after it is taken from them?

More summaries and resources for teaching or studying Her Body and Other Parties.

Her Body and Other Parties from BookRags. (c)2022 BookRags, Inc. All rights reserved.